Registrations of new light commercial vehicles fell by 3.6% to 362,149 units in 2017, according to the latest data from the Society of Motor Manufacturers and Traders (SMMT). The decline is the first such fall since 2012. 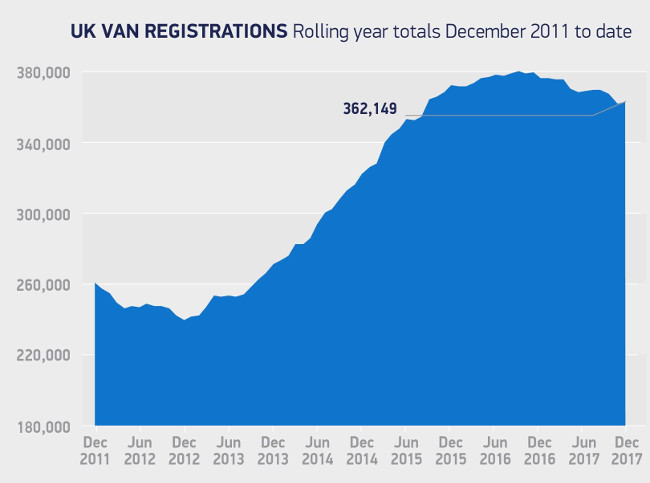 As I remarked at the start of 2017, it was clear one year ago that the rush to buy new vans was slowing. That being so, I don’t think last year’s decline is necessarily a sign of problems to come. After such strong demand growth, a period of consolidation always seemed likely.

“While the market has slowed in 2017, this was in line with expectations and demand remains at a high level. In fact, LCV registrations have increased 62.5% since 20101. For 2018, however, we expect the economic and political uncertainty to continue to affect the market so government must rebuild business confidence and encourage operators to invest in new vehicles given fleet renewal is fastest way to reduce overall emissions.”

New van registrations have indeed risen strongly since 2010. But it’s probably worth putting this in context — in 2010, the UK and western Europe was still emerging from the worst recession since the 1920s. So you’d expect to have seen strong growth since then.

I’ve written about Ford’s iron grip on the new van market before. The latest figures from the SMMT make it clear just how total the blue oval’s dominance was in 2017:

Crunching the numbers, we can see that Ford’s four top-selling vans accounted for 30.7% of all new LCVs registered last year. That’s a pretty strong endorsement of the group’s decision a few years ago to replace its entire range of LCVs.