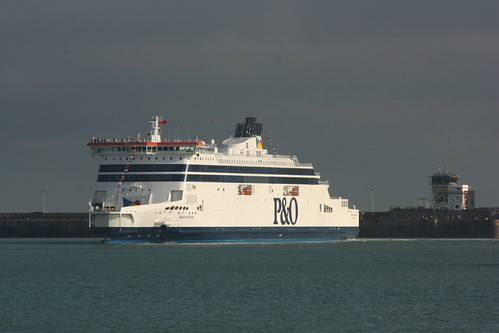 The two new ferries, which cost €180m each, are the largest ever built for operation in the Dover Straits and provide nearly double the capacity of the ships they replace, the Pride of Dover and the Pride of Calais.

The Spirit of France can carry up to 180 lorries and 195 cars, plus 1,750 passengers. It has a whopping 3,746m of vehicle lanes – if loaded only with cars, it could carry more than 1,000, as opposed to 650 on the current ferries. P&O plans to keep the two new ferries in service on this route for the next 25 years, mirroring the successful careers of the two Pride ships.

The Spirit of France is expected to enter service in mid-February – apparently, the first available booking date is currently on the 1520 sailing on 9th February 2012.

Brittany Ferries is launching a new UK-Spain ferry route from Portsmouth to Bilbao.

In September 2010, P&O Ferries discontinued its Portsmouth – Bilbao ferry service. This meant that the only remaining option for UK-Spain ferries were Brittany Ferries’ services from Portsmouth and Plymouth to Santander.

Brittany Ferries is now expanding their choice of UK-Spain ferry routes with a new service – Portsmouth – Bilbao. It’s interesting that Brittany can (presumably) make it pay where P&O couldn’t, even on the same route…

The service will initially run from Portsmouth on Sundays and Fridays and from Bilbao on Tuesdays and Saturdays. The sailings will take 24 hours, except for the Sunday sailing which will call at Roscoff for supplies and a crew change and thus will take 32 hours.

If you are heading for the east coast of Spain (e.g. Valencia, Alicante, Murcia), then you will save a little time if you start from Bilbao. Similarly, the more westerly port of Santander might be a better starting place for the Algarve, but the difference is not huge as Bilbao and Santander are only around 60 miles apart.

P&O is preparing to bring into service the largest ferries ever used in the Channel. The first ship, the Spirit of Britain, will replace the Pride of Dover from the 23rd January 2011 and will provide nearly double the capacity of the ship it replaces. The first sailing is currently scheduled for 0415 on the 23rd January.

The Spirit of Britain and its sister ship the Spirit of France will be the largest ferries ever operated in the Channel and have been designed to ‘Dover Max’ size – the largest ships that can be handled by the existing ferry port facilities in Dover, Calais and Boulogne (for those times when striking French workers put Calais out of bounds…).

Each of the new ships weights 49,000 tonnes, is 213m long and is expected to operate on this route for 25 years – as have the existing ships.

For Brits moving to and from Spain, the P&O Ferries Portsmouth-Bilbao ferry service has always been a popular option – instead of a long slog driving through France, you can enjoy a mini-cruise down the coast of France with two night’s rest in a proper cabin. Once you reach Bilbao, many popular Spanish destinations can be reached within a day’s driving.

However, that’s all set to change. The 27th September 2010 will be the last day that the P&O Portsmouth-Bilbao service runs – it is being stopped. (You can read the official P&O news release here.)

Luckily, there is an alternative and more attractive option for ferries from UK-Spain. Brittany Ferries runs a service to Santander, which sails from both Portsmouth and Plymouth (alternately). This service is actually faster – only taking around 24 hours – and uses newer ships than the P&O service.

Click here for a quote from Brittany Ferries if you’re planning a trip to or from Spain.

If you’re planning on booking a ferry crossing to take a van across the Channel to France (or Spain, Ireland or even Denmark) then you’ll need to remember certain things when booking it.

To get the latest ferry prices from all the major ferry operators, visit our Ferry Booking page now.