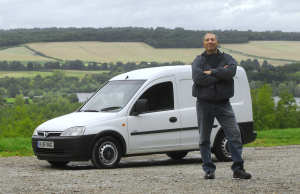 Like most of the economy, the secondhand van market is slowing down a little at the moment, with buyers only paying top money for high spec, low mileage vans.

However, it’s easy to lose sight of the fact that vans are commercial vehicles and are designed to have a much harder and higher-mileage life than cars – as Nigel Weaver’s 500,000 mile Vauxhall Combo shows.

The 53-year old courier from Maidenhead, Berks, bought his Vauxhall Combo new from Burnham Garage in Slough in 2001, just as the model was making its debut.

Seven years later, after averaging over 75,000 miles a year, Nigel’s Combo has just clocked up its first 500,000 miles, all on the original engine. 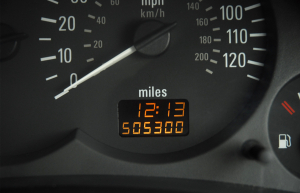 “I bought the Combo because I liked the look of it, the fact it was comfortable and like a car to drive,” said Nigel. “In my job, you need to be comfy as you spend your entire working life on the road, and it seemed a well made van so I bought it intending to run it until it dropped.”

In 2008, the 1.7-litre diesel-engined van is still going strong, and continues to rack up well over 1,000 miles a week in Nigel’s hands, often in continental Europe as well as in the UK.

“I do some work for a brewery and regularly have to take British-brewed beer out to the head office in Amsterdam,” he said. “That gets some funny looks at customs, taking a van load of beer out of the country rather than the other way round!”

Nigel claims the key to his van’s longevity is to stick to a rigorous maintenance programme. “I’ve always ensured the oil is changed as soon as it’s due, and have always used genuine Vauxhall parts,” he added.

The van has had a few running repairs, including a new steering column and reconditioned gearbox at around the 400,000 mile mark.

“I could hardly complain at that mileage!” added Nigel. “It still regularly does over 60mpg, but I’m most impressed at how the interior has held up – the cab scrubs up lovely. I’ve never had the back ply-lined, though, so the rubber mat’s looking a little worn in places these days.”