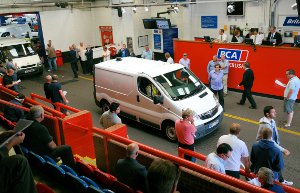 Despite the increase, used vans are cheaper than they were in September 2011.

According to BCA’s latest Pulse Report, average used LCV values improved by £149 (3.6%) to £4,224 in September compared to August, although year-on-year figures lagged behind for the first time this year.  Average age fell slightly to just under 58 months while average mileage increased to nearly 79,000.

Values increased in all three sectors, with the dealer part-exchange average values reaching record levels.  Performance against CAP average improved over the month by nearly two points to 100.7% but remains much lower than in September 2011, when average prices were 105.93% of CAP price.

Year-on-year, September 2012 was £185 behind the same month in 2011, with both average age and average mileage increasing this year.

Used van prices have weakened in recent months as the average mileage and age of second vans has continued to increase. However, despite last month’s increase, the table above shows that used van values are now falling in year-on-year terms.

“The market bounced back in September following the quieter summer period.  Much of this improvement is seasonally driven as trade buying activity rises to meet the needs of small businesses that often look to change their vehicles in the autumn months.”

“However, we are yet to see any significant uplift in vans from corporate fleet sources and demand is still outstripping supply which is keeping values firm.”

“Many buyers are looking at older, higher mileage vehicles if they are in good condition and as a direct consequence we have seen values rise in the dealer P/X sector, while demand for the very few late year, low mileage LCV’s remains intense.  Some astute rental operators are selling stock to take advantage of the demand in the sub-two year old van market and are reaping the rewards as a result.  There is also interest in poorer condition vans if they are valued sensibly.”

“Even so, we expect to see some pressure on values as volumes rise in the wholesale sector and retail demand softens in the run-up to the year end.”

It all adds up to a market that is weak in terms of supply and demand — but with demand slightly exceeding supply and keeping prices firm.