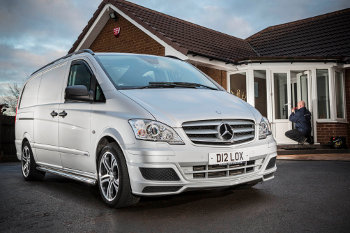 A 100-yard test drive of a dynamic Vito Sport-X van was all it took to convince locksmith Jason Gould to sign on the dotted line.

Jason, whose firm Dr Locks is based in Halesowen, West Midlands, had owned a string of Vito and Vito Sport models – but then he strayed from the three-pointed star and bought another make of van.

“I fancied a change, and it was a nice vehicle,” he recalls. “But it very soon dawned on me that it just wasn’t a Mercedes-Benz. It lacked the quality and comfort of the Vito, and it didn’t have the ‘feel good’ factor I’d been used to.”

Jason hotfooted it back to his local Mercedes-Benz dealer,  Midlands Truck & Van, where he was invited to take a quick spin in Managing Director Jon Divers’ ‘company car’, a fire-breathing Vito Sport-X. It was love at first sight, as Jason explains:

“I’d scarcely left the forecourt before I realised that this was the van for me. It really looks the part and the fact that it’s so quick makes it a real joy to drive. I dropped Jon’s van back at the dealership and ordered my own there and then.”

Jason isn’t the only company boss to choose a Vito Sport-X as his company car, and given the van’s spec, this doesn’t surprise me: the Vito Sport-X is powered by a V6 engine that delivers an eye-watering 167 kW (224 hp) output to the road via a five-speed automatic transmission.

A former Birmingham City Council carpenter, Jason started his own business in 2005 after buying specialist tools and teaching himself to pick locks. The company was a success from day one and its expert team now provide an emergency 24-hour call out service, as well as offering bespoke security and alarm solutions.