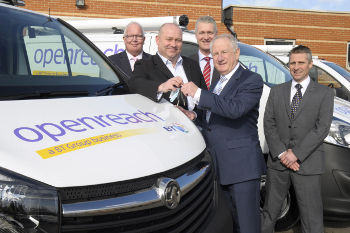 In a post yesterday, I highlighted the strong growth in UK van and truck manufacturing output this year. The number of units produced rose by 36.8% in April alone.

That’s all good news, but it’s useful to understand what lies beneath these figures. In this case, one of the key factors driving this year’s growth is the ramp-up in manufacturing of the new Vauxhall Vivaro, which is built at GM’s Luton plant.

Fleet uptake of the new model seems to be encouraging. One big customer, BT Fleet, has now taken delivery of 2,500 new Vivaros and 330 Corsavans, for use by its engineers nationwide.

That’s a big order — to put it into context, in total, including models built for export, 8,629 vans and trucks were built in the UK in April. There’s a good chance that a fair number of these are now wearing BT’s livery.

For those who are interested, the BT Vivaros are L1H1 2900 90PS (short wheelbase, low roof) models specified with BT’s custom racking in the rear.

As part of their engagement in this landmark fleet deal, the BT engineers were able to visit Vauxhall’s Luton Plant to see the Vivaro being made, and the plant also organised for the group to see the 500th van from their order.

“We had the previous Vivaro on our fleet for many years, and the new model makes absolute sense with outstanding whole life costs. The fact that it is built in Britain is an added bonus; it not only supports British jobs and industry but also provides a significant improvement in lead times and logistics.”

BT tends to run vans for around five years, I believe, as they don’t do huge mileages. However, they are very well maintained and often have a regular driver, making them attractive used buys when they do hit the market.