Ford Transits and the AA go together like turkey and Christmas pudding. This close relationship is set to continue with Ford set to deliver more than 550 Ford Transit Custom and Courier vans to the AA. 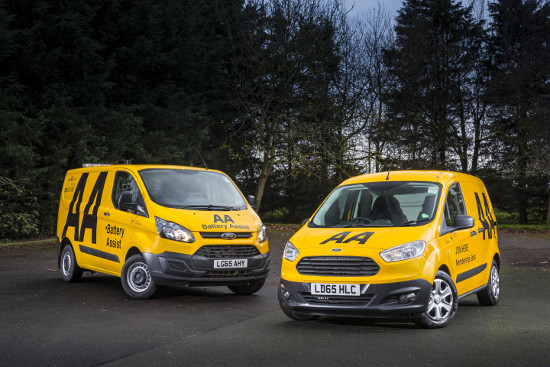 In doing so, Ford will maintain its 50 per cent share of the motoring organisation’s distinctive 3,000-vehicle fleet.

The bulk of the AA’s order is for Ford Transit Custom, with around 400 being fitted by Ambrosetti UK with the AA’s new recovery trailer system, heavy duty electrical systems, special equipment racking and the organisation’s trademark yellow livery.

In one of the largest orders to date for the recently launched Ford Transit Courier, the AA is taking 70 examples for use by agents selling memberships across the UK.

This year’s order takes the AA’s total delivery of Ford Transit Custom models to almost 850 in the two years since the van was launched. It’s a popular choice among the AA’s technicians, according to AA commercial vehicle fleet engineer Chris Wiltshire:

“Ford Transit Custom is very well received. Technicians like the working space, the cab and driving position, and we like it for the best load area in class, enhanced towing capacity and very good whole-life costs.”

With a fleet this large, it makes sense to operate more than one marque of vehicle in order to reduce the risk of any fleet-wide problems and to keep your suppliers on their toes.

The AA has also been a big buyer of Vauxhall Vivaro and Volkswagen Transporter vans over the years. The Transporter seems to be popular at the moment — back in July VW received a 500-van order for new Transporter patrol vans.