The figures — from the Society of Motor Manufacturers and Traders (SMMT) — show that export sales were 65% higher in January than they were last year.

The majority of our CV exports are sold in Europe. This strong rise in sales suggests that a real recovery is underway in major eurozone economies:

“CV production got off to a great start in January, with output up by a quarter on last year. Recovery in Europe continues to benefit the sector, driving production for export up an impressive 65% last month, with more than half of all commercial vehicles in January produced for international markets.”

Here’s how the UK’s CV export history looks in graphical form. After bottoming out at the end of 2014, last year saw a very strong recovery: 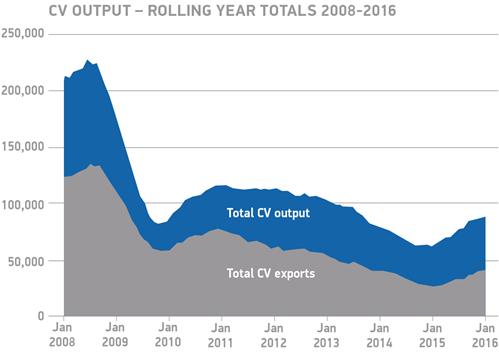 Another way of looking at these figures is that UK CV production now accounts for around 10% of the commercial vehicles registered in the UK. Although I suspect this is much lower than in France and Germany, it’s not too bad a result given the globalisation of the automotive industry.