UK commercial vehicle production rose by a modest 1.5% in February, according to the latest figures from the SMMT.

This means that export demand accounted for 52.6% — a majority — of production. A year ago the split was in favour of home demand, with just 44.5% of CVs produced in the UK going for export:

The growth in export demand is good news for the UK’s economy and suggests to me that the economies of major eurozone countries are continuing to recover.

“February’s positive CV output, while more subdued than in January, continued to reflect buoyant demand for British-built vans, trucks, buses and coaches. Once again, the ongoing recovery in European markets was the driving factor, with output for export growing for the seventh consecutive month, and up by more than a third for the year to date.”

With total production up by 10.5% so far this year, the outlook for the UK’s CV industry appears fairly strong. As the graph below shows, manufacturers have made steady progress since the low point of last February: 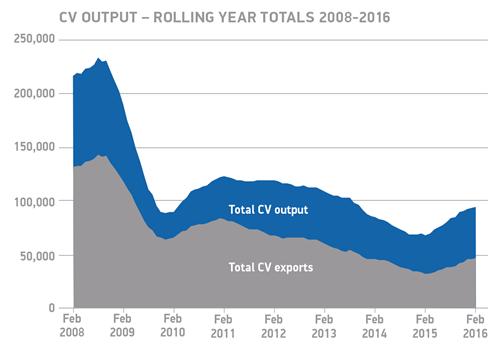