Demand for new vans fell by 4.5% to 26,950 units in October, according to the latest figures from the Society of Motor Manufacturers and Traders (SMMT). But total registrations for the year-to-date remain up by 2.0%, according to the trade organisation.

October’s figures suggest that total registrations were dragged down by a significant fall in sub-2.0t and 2.5-3.5t models: 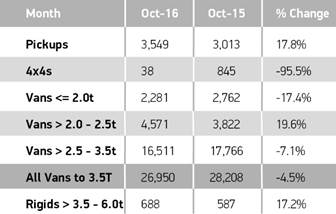 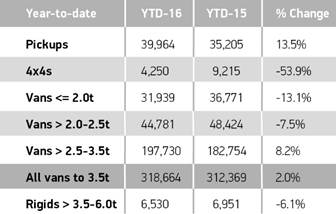 “Following the sector’s very strong performance in 2015, a levelling off in demand was expected, so this month’s decline comes as no surprise. Overall, the market remains robust, with the number of van registrations in the first 10 months of 2016 outperforming any other year on record. Maintaining business confidence for LCV operators will be critical to this sector’s future performance.”

I agree that some flattening off of the market was likely after last year’s bumper performance. It will be interesting to see how much further sales trends have to fall before reaching stable levels.

It should come as no surprise to anyone that Ford retained its position as the UK’s best-selling LCV brand in October. Running a distant second was Volkswagen. Here’s a rundown of the full top ten for October and for 2016 to date: 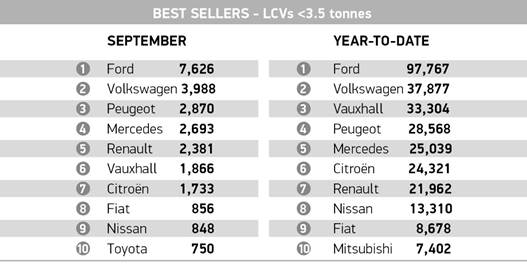 Van sales may be falling, but with more than 30% of the market, Ford’s position appears unassailable.