Harrods has made history by adding an electric van to its fleet — 100 years after the iconic London department store’s first electric vans hit the road. 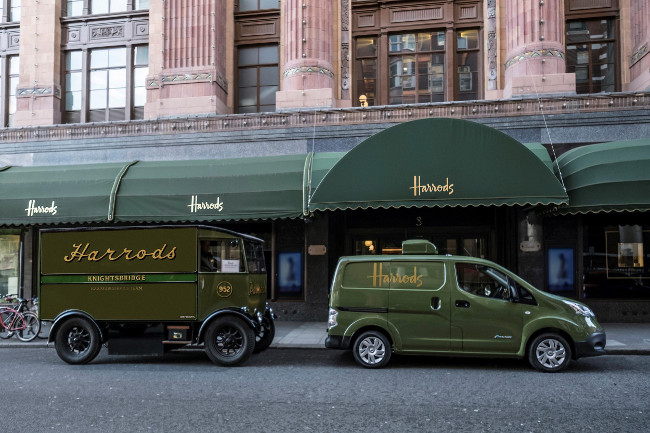 The new van is — of course — a Nissan e-NV200. But it’s incredible to realise that back in 1919, Harrods delivery drivers were motoring around London in American Walker electric vans. The company then went on to build its own fleet of 60 electric vehicles to deliver to London customers.

It was only when the petrol engine became increasingly popular that Harrods dropped electric power and switched to the internal combustion engine.

“It’s wonderful to see an electric Harrods van on the roads of London again. As one of Britain’s largest established department stores, we are committed to reducing our carbon emissions and mitigating our environmental footprint. As part of our carbon and energy management policy, we have identified transportation as a key area where we can make a real impact.

Harrods Nissan e-NV200 — a single van so far — has been wrapped in the store’s unmistakable green and gold livery and fitted out inside with shelving units and refrigeration to enable it to deliver fresh groceries in perfect condition.

According to Nissan, the e-NV200 can cover up to 106 miles on a single charge, meaning that it may only need to be charged once a week by Harrods.