Registrations of new light commercial vehicles fell by 0.9% in March, despite the third month being the longest of the year so far in terms of trading days.

According to the latest figures from the Society of Motor Manufacturers and Traders (SMMT), new van and pickup registrations fell by 0.9% to 63,316 units in March, compared with the same period last year. 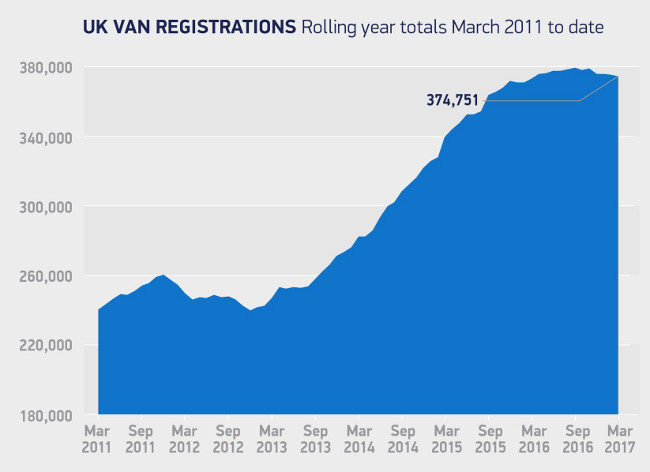 Looking at the other categories, heavy vans (2.5-3.5t) remained strong. This is always the largest segment in the LCV class and remained so in March, with new registrations up by 3.6% to 40,237 units.

“The new van market has experienced strong levels of demand in recent years and this dip in registrations represents a natural rebalancing of the market. Despite the decline, demand remains at an historically high level with year-to-date registrations matching 2015’s performance, which was only exceeded by demand in 2016.

We expect demand to remain stable at this high level throughout the year.”

As head of the automotive industry trade body, Mr Hawes would be positive. But I think it’s fair to say that the figures for new van sales still look good. New data from auction group Manheim suggests that this strength extends into the used market, too, despite concerns last month that ex-rental vans were flooding the market.

Despite this increase in volume, conversion rates rose by 3% compared to February. This indicates that a greater proportion of vans offered for sale were sold.

And while selling prices dropped by 3% to £5,298, average age and mileage also increased, by 3 months and 2,000 miles respectively. So average pricing looks pretty firm, if not positive, to me.

Manheim expects buyer demand to remain strong in April, but says that lower de-fleet volumes may reduce the number of vans for sale, providing further support for prices.

The overall picture presented by the SMMT figures and the sales data from Manheim suggests to me that the UK van market remains healthy and stable.

History suggests that this is a reasonable barometer for the state of the economy, so let’s hope for more such ‘boring’ updates over the coming months.