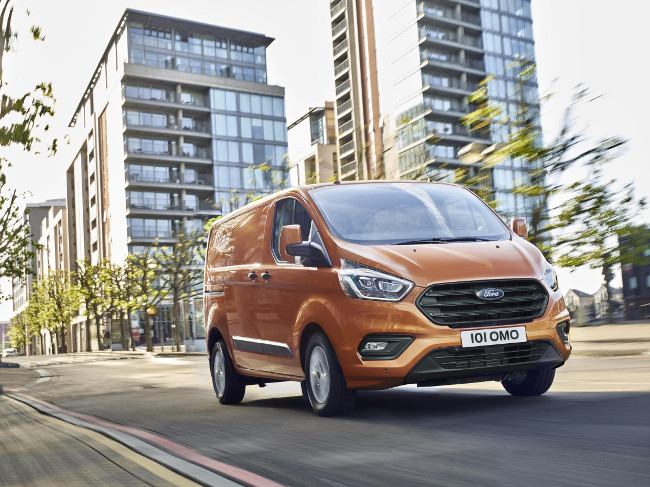 The 2018 Ford Transit Custom will have an updated front end and new interior.

The Ford Transit Custom is Britain’s best-selling van by a country mile. The one-tonne panel van sold 26,813 units during the first half of 2016, double that of the second-placed model, the full-sized Ford Transit.

The top-selling non-Ford van was the Volkswagen Transporter, which managed just 10,921 sales — less than half that of the Transit Custom.

It’s clear that the UK’s love affair with the Transit van is as passionate as ever. But Ford isn’t resting on its laurels. The Blue Oval is planning to unleash an updated version of the Transit Custom for 2018. Highlights will include “sharper styling“ an updated cabin and a fuel-saving ECOnetic model.

A plug-in hybrid version of the Transit Custom is also on the cards and is currently on trial in London. However, the production model isn’t expected to be ready until 2019.

Here’s a round-up of the changes you can expect when the new Transit Custom models reach dealers early in 2018.

Fuel-saving: The Transit Custom will continue to be offered with Ford’s Dagenham-built EcoBlue diesel engine. This will be available with a choice of 105PS, 130PS and 170PS power outputs.

However, a full ECOnetic version will also be available for the first time. This will be offered as a 105 PS 300 Series short wheelbase model. Changes from the standard model include modified engine tuning, Auto-Stop-Start, low rolling resistance tyres, Ford’s Acceleration Control feature (which limits acceleration when the van is empty) and a fixed 62mph speed limiter.

Ford claims the ECOnetic will deliver 148g/km of CO2 and combined cycle fuel consumption of 49.6mpg, a 6% improvement over the most efficient current model.

Style & storage: The styling of the van will be updated with a new three-bar grille and what’s described as “a completely new cabin” with best-in-class storage and improved comfort and ergonomics. Connectivity will be provided by Ford’s SYNC3 or MyFord Dock options. 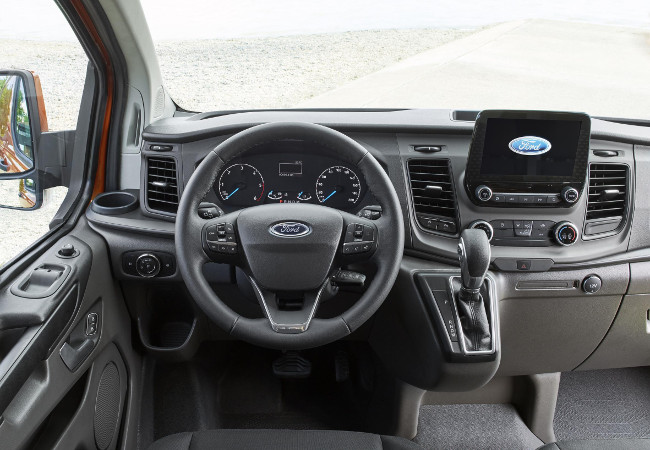 The new-for-2018 Transit Custom will have an all-new dashboard. 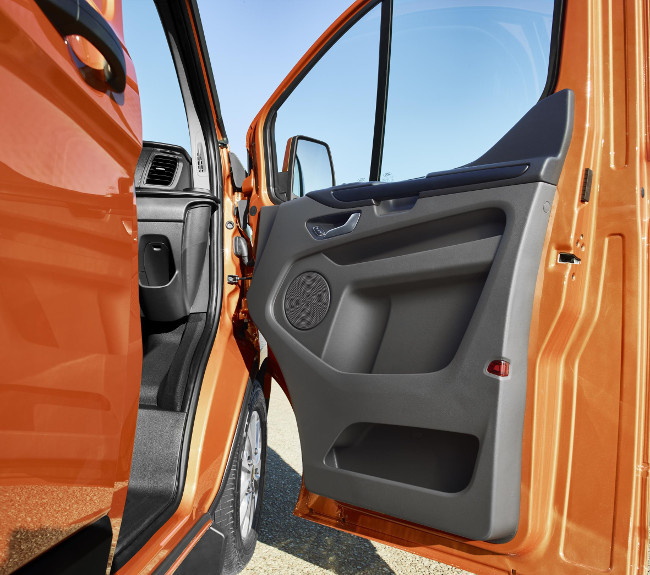 Door storage will be improved in the updated van.

Safety: New features will include Ford’s Intelligent Speed Limiter, which will be available on a van for the first time. Blind Spot Information System and Cross Traffic Alert will also be offered.

Sport: The popular Transit Custom Sport will also get an update. The signature twin bonnet stripes and body kit have been redesigned for the new model. Changes include “distinctive new two-tone stripes in black with orange or silver accents”. Not one for shrinking violets, then.

We say: This mid-life update promises to make an already-great van even better.