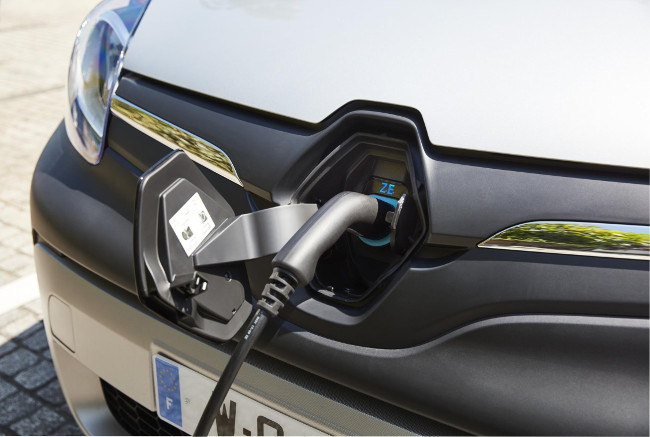 The new Renault Kangoo Van Z.E. 33 will have a 50% longer range than the old model.

Back in December, Renault promised van buyers a new version of the Kangoo Z.E. electric van with a 50% longer range. The new model — the Kangoo Z.E. 33 — is now available in the UK and the company has released pricing and specification details.

An upgraded battery and motor drivetrain means that the van can now travel up to 170 miles (NEDC figures) on a single charge. That’s about 50% further than the previous version of the van, which had an official range of 106 miles.

However, Renault makes it clear that these NEDC figures are largely nonsense in real world conditions. In today’s press release, the French firm said it estimates that the Kangoo Van Z.E. 33 “has a real-world range of up to 124 miles” in summer, reducing to “75-99” miles in winter.

Priced from £14,194.56 (after governement plug-in grant and excluding VAT), the New Kangoo Van Z.E. 33 will be available in four body styles:

As is the case with many electric vehicles, buyers can opt to lease the battery on a monthly payment or buy it outright by paying more upfront. Our view is that leasing makes more sense, in order to ensure that you are protected from any future battery problems or replacement costs.

How has Renault increased the range?

The longer range of the Kangoo Van Z.E. is the result of a package of improvements.

The main change is a new, higher density 33kWh battery. This has the same dimensions as the old battery but nearly double the energy storage capacity.

An updated electric motor has been coupled with the new battery. And the whole system is tied together with an updated electronic battery management system.

To help reduce charging times, the Kangoo Van Z.E. 33 can be fitted with an optional upgraded charger that reduces charging times to just six hours and can add 21 miles to the charge in just one hour.

Another new feature is an optional heat pump, which will heat the van more efficiently in cold weather, reducing energy usage and thus increasing range. The new model will also keep its pre-conditioning system which allows drivers to heat or cool the vehicle before use while it’s still hooked up to mains electricity.

Aside from the environmental benefits, electric vans continue to offer a number of financial incentives for business owners.

These include exemption from most congestion charges and qualification for low emissions zones. They also remain exempt from UK VED (road tax) and offer zero Benefit-in-Kind (BIK) liability for company vehicle drivers.