The latest figures from the Society of Motor Manufacturers and Traders (SMMT) show that registrations of vans with a maximum gross weight of 2.0t-2.5t rose by 39.9% to 3,049 units last month. The most common cause of a large surge in registrations in this class is the delivery of a large fleet order, so I’d imagine this was the explanation.

Elsewhere, registrations were flat or lower, as these figures show: 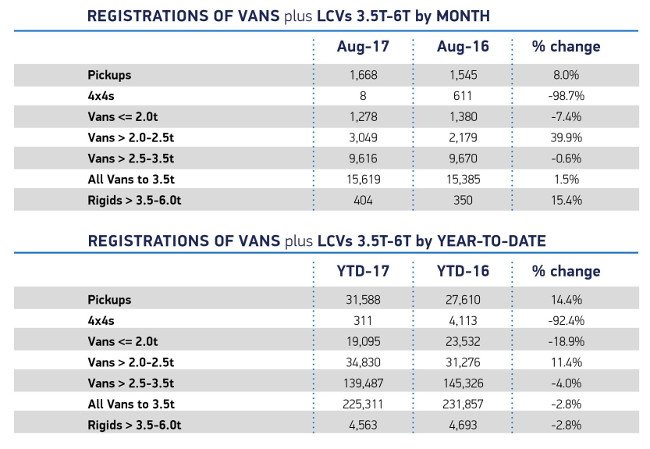 “August is traditionally one of the quietest months of the year, ahead of September’s plate change, so the moderate increase in the new van market is welcome news. While year-to-date figures show demand easing, this is in line with market expectations and overall registration volumes remain at a very high level. This stabilising of the market is indicative of what we can expect for the remainder of the year.”

Moving over to look at the mix of vans sold, it’s clear that Ford’s comprehensive and excellent range of vans continue to have a stranglehold on the UK market.

Remarkably, more than one in every four vans sold so far this year has been a Ford. The manufacturer blocked out the top three slots in the best sellers table last month, as sales of the Transit Connect picked up:

Ford has always been the dominant van manufacturer in the UK, but I’d guess that the firm’s French and German rivals (plus Vauxhall) may be starting to wonder what they have to do to make in-roads into the Blue Oval’s market share.