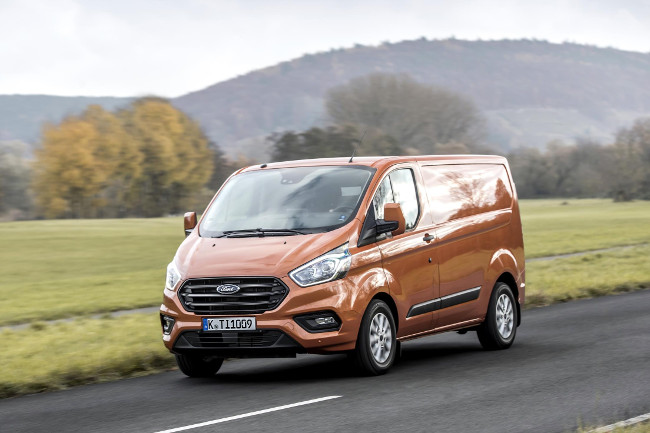 First deliveries of the new Ford Transit Custom are expected early in 2018. The updated model has a new front end plus additional safety tech and communications. It will also be available in a fuel-sipping ECOnetic variant. Image: Ford

Hans Schep is General Manager, Commercial Vehicles, of Ford of Europe. He’s naturally going to talk up his own products, but when he describes the Transit Custom van as “a runaway success”, I don’t think he’s exaggerating.

As we’ve reported a number of times previously, the Transit Custom is outselling its rivals in the UK market several times over. At the end of August, trade body figures showed that 31,868 new Ford Transit Customs had been registered so far in 2017. The models closest rival, the Volkswagen Transporter, had clocked up just 13,041 UK registrations in the same period.

However, it’s easy to forget that the current Transit Custom has been on sale since 2012.  So it’s not a complete surprise to hear that Ford will be launching an updated version of the van later this year.

The new model will have an updated front end, featuring Ford’s distinctive new radiator grill design. Under the bonnet, the 2.0-litre EcoBlue that was introduced in 2016 will remain, with buyers getting the choice of 105PS, 130PS and 170PS power ratings.

A new ECOnetic variant will also be available on 300 SWB vans, promising CO2 emissions of 148g/km and official combined cycle fuel consumption of 49.6mpg. Ford says this is a 6% improvement over the most efficient current vehicle.

Among the changes made to achieve this result are low rolling resistance tyres, Auto-Stop-Start, Acceleration Control (which limits acceleration when unloaded) and a fixed 62mph speed limiter.

Ford says the cabin is “completely new” and uses an instrument panel based on the new design philosophy first seen in the latest Fiesta. The company claims it’s “influenced by consumer interactions with smart devices and tablets” and has “strong horizontal design elements”. See for yourself: 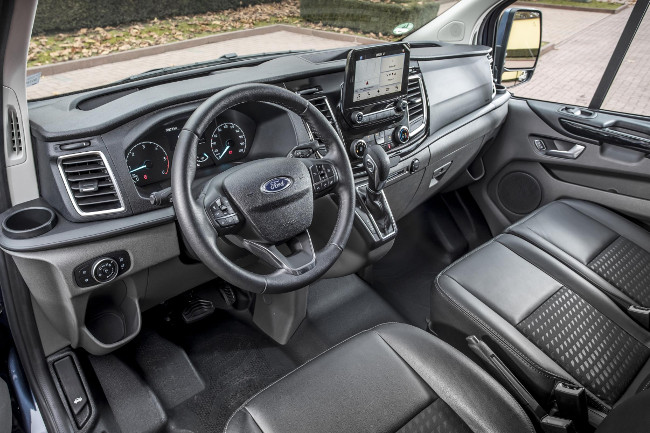 The new cabin interior in the 2018 Ford Transit Custom

The focus is on providing a good workspace for drivers who use the van as a mobile office. High-spec vans will get Ford’s SYNC3 infotainment system plus an eight-inch colour touchscreen.

Lower spec models get a four-inch screen, while entry level vans get the MyFordDock in the centre of the instrument panel, allowing drivers to mount and charge their smartphones or sat nav devices. Multiple USB and 12V sockets are provided for easy charging.

Less visible but no less valuable are improvements to the safety technology fitted to the Transit Custom. The new van will be available with Intelligent Speed Assist, which acts as a dynamic speed limiter, adjusting the vehicle’s maximum speed to remain within legal limits.

Other new options include the Blind Spot Information System with Cross Traffic Alert, which uses radar sensors to detect when passing vehicles may be in the blind spot, and lights a warning light in the appropriate wing mirror.

Cross Traffic Alert uses the same sensors to warn drivers reversing out of a parking space if nearby vehicles or bicyles are about to pass behind them.

I recently drove a Ford car fitted with both of these systems and I have to say that while I don’t consider them a necessity, they worked well and were very useful. Definitely worth having, as long as they don’t make you lazy.

When will it be available?

Production of the new van is due to start late in 2017. First UK deliveries are expected early in 2018. A new plug-in hybrid model (currently on trial in London) is expected to launch in 2019.