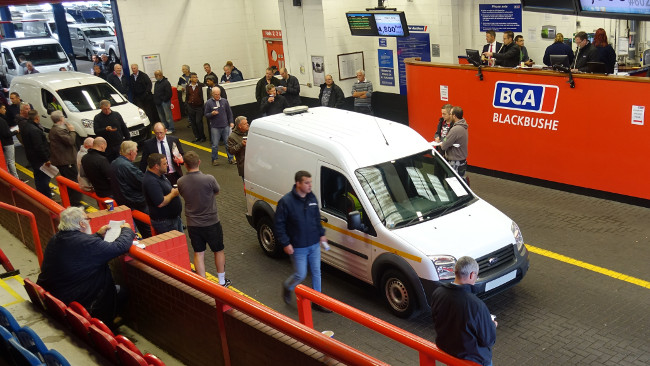 Used vans being sold at a BCA auction in September 2017.

The average price of a used van sold at auction last month was £6,651. That’s a 5.1% increase from August and an 8.3% increase the same period last year:

Of course, some of these price increases are cancelled out by this year’s lower average age and mileage. As shown in the table above, vans sold in September had an average of around 6,500 miles fewer on the clock and were nearly 3 months newer. BCA says that this is a reflection of higher volumes of ex-rental vans and corporate stock being sold.

Duncan Ward, BCA’s LCV Operation Director, says that the demand for used vans is broad based and growing:

The LCV market has seen continued value and volume growth throughout much of 2017. There has been steady demand for vehicles to service online shopping delivery, the construction and civil engineering industries and the small business and entrepreneurial start-up sector. BCA continues to experience plenty of demand for tippers and dropsides, Lutons and larger panel vans, the latter often going back to work to service the online shopping sector.

One way of reading this is to suggest that the real domestic economy is in good shape at the moment. But there is another possible interpretation. Registrations of new vans fell by 4.2% in September, according to recent figures from the Society of Motor Manufacturers and Traders (SMMT). Are small business van buyers trading down — from new to ex-fleet, and from ex-fleet to (older) part-exchange models?

It’s too soon to say if new van sales are in a downtrend. But one point of interest relating to used van sales is that cheaper vans are seeing increasingly strong demand. Prices for dealer part-exchange models — which are usually 6-7 years old — rose sharply for the second consecutive month.

These cheaper, older models fetched an average price of £4,359 in September, up from £4,226 in August and £4,012 in July. To put that in context, the average price of an ex-fleet or lease van was £7,491 last month. So opting for older part-exchanged models is certainly a way to free up cash for companies.

I’ll be keeping an eye on these figures over the next few months, looking for correlations between new van registrations and the different classes of used sales. Although the surge in P/X vans may simply reflect couriers buying cheap extra vans for festive deliveries, it could be the start of a more worrying trend.