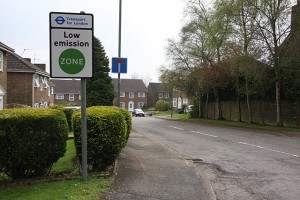 If you live or work inside the M25 and drive a van (or minibus or motorhome) that was registered before 1st January 2002, then the 2012 changes to the London Low Emission Zone affect you.

Similarly, minibuses with more than 8 passenger seats and a gross vehicle weight of up to 5 tonnes must also meet the Euro3 standard.

These changes only apply to diesel vehicles – petrol models are unaffected. Euro 3 became mandatory from October 2001, so if your van was registered after then, it will probably be compliant. However, for reasons best known to themselves, Transport for London (TfL) has set the cutoff date for automatic compliance to be 1st January 2002.

To make things even more confusing, a number of companies were producing vans with Euro 3 engines from as early as July 2000 – such as Ford Transit models. These ‘early adopters’ have now registered with TfL, so if your van is one of the early Euro 3 models, it should be recognised as such.

However, there are no guarantees! To check whether TfL believes your van or minibus will be compliant with the 2012 rules, visit the online compliance checker:

If you believe your van is Euro 3 compliant but the TfL Compliance Checker does not agree, you will have to prove that it is compliant or pay £100 per day to use it within the LEZ from 3rd January 2012.

Vans over 3.5t are classified as lorries and are subject to more stringent new rules.

Starting from 3rd January 2012, all vans with a gross vehicle weight of more than 3,500kg will need to be compliant with Euro 4 emissions standards.

The cutoff date for this is 1st October 2006, but as with lighter vans, some manufacturers were producing Euro 4 engines before they became mandatory in October 2006.

These early adopters of the Euro 4 standard have (mostly) registered their compliant vehicles with TfL, so if you enter your registration number into the TfL Compliance Checker, you should get a thumbs up.

If the compliance checker says you vehicle is not Euro 4 compliant but you think it is, then it is up to you to prove it to TfL.

What To Do Next?

If you van is compliant with the 2012 LEZ rules, then you have no problem. If it isn’t – but you still need to use it inside the LEZ (which occupies most of the area inside the M25, but not the M25 itself), then you will need to decide what to do.

The LEZ rules are being enforced by Automatic Number Plate Recognition (ANPR) cameras – so there will be no avoiding the penalties if you try to ignore the rules.

Some vans can have diesel particulate filters fitted to their exhaust systems to make them compliant. However, these are expensive (£1500-£3000) and not suitable for all types of van. In addition, they have a record of being troublesome if they are used in town all the time without any longer, high-speed journeys.

If you only need to make occasional visits to the LEZ, the cheapest solution may be to rent a van whenever you need one. For more regular use, you may need to consider long-term rental, leasing or buying a new van – there are no exemptions from these rules except for London taxis.