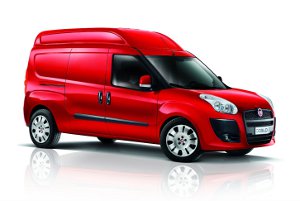 Fiat has extended its Doblò Cargo van range with the Doblò XL, a long wheelbase, high-roof version of this not-so-small van.

The Doblò XL’s combination of a long wheelbase and high roof provides a load volume of 5.0 m3 and a payload of 1,000kg, providing customers with a new proposition previously unavailable in this segment. The Doblò XL is the latest non-standard variant of the Doblo, following on from the Work Up, a pick-up version introduced last year.

The Doblò XL is likely to appeal to a  variety of customers, including utilities, service vehicles (with ladder stored internally), converters and wheelchair-accessible transport for example. Its small van cost and medium van 1,000kg payload mean that it might well appeal to van operators looking to downsize and save money.

The New Doblò XL will be available in Cargo and Combi (people carrier/crew cab) versions and as with the existing Doblò Cargo and Combi range, the Doblò XL will be available in two trim levels. In addition, Combi M1 versions will have side airbags and ESP as standard equipment. Options include Blue&Me with steering wheel controls, Blue&Me TomTom navigator and eco:Drive Professional software.