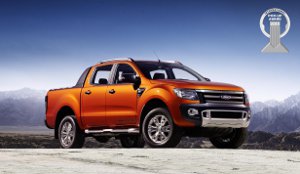 The new Ford Ranger has won the  “International Pick-Up Award 2013” at the Fleet Transport EXPO 12 event in Dublin.

Every member of the judging panel ranked the new Ranger as their number one choice; praising its performance on- and off-road, strong engine line-up, payload and towing capability, and safety.

The new Ford Ranger won the award following extensive testing at Millbrook Proving Ground near Bedford – after which it was awarded 47 points – more than the combined number of points awarded to the second- and third-placed Isuzu D-Max and Volkswagen Amarok.

The new Ranger was a completely new model and also distinguished itself by being the first pick-up to be awarded a 5-star Euro NCAP rating earlier this year.

The Ranger is available in three cab bodystyles – Double, Super and Regular – and comes with a choice of two powerful and economical Duratorq TDCi engines and the option of either 4×2 and 4×4 drivetrains.