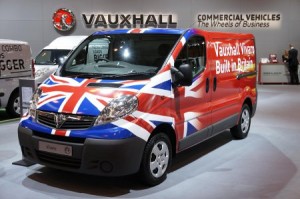 Vauxhall built over 58,000 vans in the UK last year, making it Britain’s number one commercial vehicle manufacturer for the 11th year running.

The Luton-based company makes both the Vivaro van and the Astravan in the UK, at its Luton and Ellesmere Port factories respectively. The bulk of the 58,000 vans were Vivaros, 53,465 of which rolled off the Luton production line last year.

It’s unfortunate that there isn’t much volume manufacturing competition for Vauxhall in the UK.

With Ford winding down Transit production at Southampton and the big French and German manufacturers unlikely to ever locate factories in the UK, the only hope is that the range of bus and smaller CV manufacturers located here will continue to thrive.

Of these, the most notable is probably DAF, which continues to build lorries in Leyland and produced 14,568 in 2011, the last year for which I could find official SMMT figures.

Still, at least Vauxhall has already guaranteed that the next generation Vivaro will be built at Luton from 2014 and Ellesmere Port will be the lead European manufacturing plant for the next Astra when it starts production in 2015. It looks like the company is determined to extend its 110-year history of UK vehicle manufacturing a little longer yet.