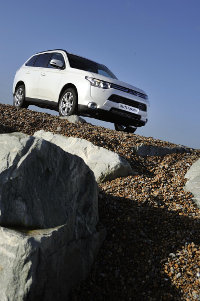 Mitsubishi has launched an all-new version of its mid-size Outlander 4×4. The company will continue to produce a commercial version of the 4×4, which will be badged the Outlander GX1 4Work.

As with the outgoing model, the GX1 won’t be a full-blown van, but instead will have blacked-out rear windows and no rear seats, providing a 1,000-litre loadspace,  along with go-anywhere capability. The new Outlander has a 2,000kg towing capability, making it superior to the majority of cars and vans and cheaper than most of the heavyweight towing 4x4s.

What’s more, the new Outlander will shortly be available in hybrid spec: although the Outlander Plug-In Hybrid PHEV official homologation figures will be finalised in a few weeks time, the latest data already confirms the excellent credentials with targeted CO2 emissions (weighted) of 44g/km, fuel consumption of a staggering 147.9 mpg and an electric driving range of 32.5 miles.

The previous Outlander was also sold badged as the Citroën C-Crosser, and both models were available in a commercial version, designated the Outlander GX1 and C-Crosser Enterprise  respectively.