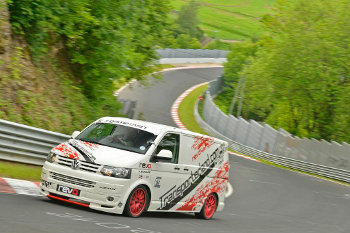 The Revo Volkswagen T5 on the Nurburgring

Top Gear fans will undoubtedly remember watching German racer and ‘ring expert Sabine Schmitz set a new lap record around the Nurburgring in a Ford Transit, a few years ago.

Until recently, that record — for the fastest commercial vehicle lap of the ‘ring — has stood. But no more.

Perhaps fittingly, the lap record has been reclaimed by a German van, a modified VW T5 Transporter that smashed the record by breaking through the 10 minute barrier.

Volkswagen tuning experts Revo were sure that the lap time set by Ms Schmitz could be improved upon, with a little preparation.

To that end, it acquired a used T5 with 80,000 miles on the clock, and then breathed on it slightly, adding a bespoke ECU remap, Milltek ‘turbo-back’ exhaust system and a Forge intercooler/oil cooler combination. This was enough to take the engine to an impressive 220bhp and deliver a healthy increase in torque, too. 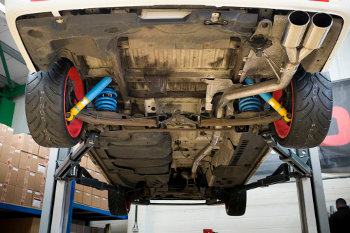 Revo’s modifications were limited to tyres, suspension and exhaust, in addition to an engine remap that boosted output to 220bhp and an uprated intercooler.

Although the T5 is one of the best-riding vans on the road, handling and roadholding was improved with the addition of BILSTEIN’s well-proven B14 coilover kit, a quartet of lightweight Team Dynamics wheels and a set of sticky, but fully road legal, Direzza boots from Revo’s tyre partner, Dunlop.

With this lot fitted, the ethos was simple:

No trailers, no back-up plans, no contingencies. Just a simple proving exercise of the concept in a real-world situation.

Despite driving hard on track, the intelligent tuning and thoughtful engine mapping ensured that fuel economy during the trip under normal driving conditions remained exceptional.

For its ‘Ring record attempt, the van was driven by another ‘Ring pro, Dale Lomas, who hustled the T5 around for a few laps in the midst of some track day traffic, emulating the Top Gear record attempt, which was also performed with other traffic on the track.

The end result was a new lap record of 9 minutes 57 seconds around the full circuit, which is around a mile longer than the ‘Bridge to Gantry’ lap time set by Sabine Schmitz in the Top Gear Transit. Impressive stuff.

Here’s a video of the record run, and below that I’ve included the video of the original Top Gear hot lap for comparison. Van driving doesn’t get much hotter than this:

For more information about Revo and the record-breaking T5, visit the official website.