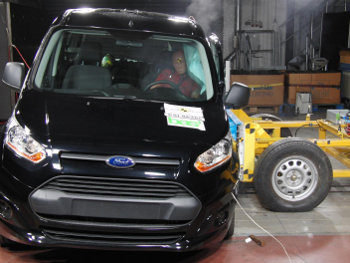 The new Ford Tourneo Connect is the first compact people mover to score a maximum five stars in the Euro NCAP crash tests.

The safety ‘star’ ratings provided for all modern car models are awarded by safety testing organisation, Euro NCAP. For some reason, panel van models are not including in the testing programme, but the minibus/people carrier versions of current van models are tested.

Historically, despite their size and solidity, vans haven’t performed very well in safety tests, due to poor pedestrian safety and lower levels of safety assist technology. Those two trends remain a problem in the van market, but things are improving, as today’s test results show.

The VW T5 is a perennial favourite amongst campervan owners and small businesses and has also had some notable fleet successes, including becoming the RAC’s standard van for a period, and being chosen by some van hire companies to fill their medium van segment.

The VW T5 Kombi’s four-star rating is strong, and occupants of the vehicle certainly have nothing to worry about — the T5 scored 79% for adult occupants and 74% for child occupants.

Pedestrian may not fare so well, however, as the T5 only scored 32% for pedestrian safety. To some extent this is inevitable with vans, which are always going to have a higher bumper line and a more steeply sloping front end than cars, due to the need to maximise loadspace and payload (which requires bigger tyres and a certain amount of suspension travel, raising the vehicle).

What’s less excusable is that vans often come with lower levels of safety equipment than cars. VW scored a middling 57% in the safety assist category, as although the T5 Kombi it does come with electronic stability control as standard, there is no seatbelt reminder for passengers and no option for a factory-fit speed limiter.

The Tourneo Connect is one of Ford’s brand-new commercial models and will also be sold in van format. Ford has really raised the benchmark for LCV safety since it started to roll out its revamped van range, and the Tourneo Connect has not disappointed, with a five-star rating that makes it the first the first compact people mover to be awarded a maximum Euro NCAP safety rating:

Ford scored more highly in the safety assist category thanks to the presence of a front seat passenger seatbelt reminder and the option of a speed limiter, as well as having Electronic Stability Control as standard.

Here’s an interesting one. The Citan Kombi was originally tested in April, when it scored an underwhelming three stars, which I suggested might be due to its Renault origins, and did not reflect Merc’s normally-high safety standards.

One can only imagine that the top brass at Stuttgart weren’t happy with this situation, as the Citan Kombi has now had some subtle modifications and has been re-tested and upgraded to a four-star rating. Although an improvement, it’s still one star behind its key competitor, the Tourneo Connect (above), which scored five stars — so what are the Citan’s weaknesses?

Here’s the breakdown of the Citan’s score:

So while the Citan ticks the same boxes as the Tourneo in the safety assist category, it didn’t fare so well in any of the others, especially in terms of pedestrian safety, where no improvements have been made.

You can see full details of all Euro NCAP test results on www.euroncap.com (it’s all free to access).