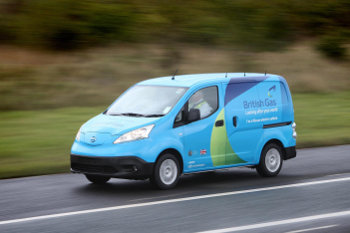 One of the Nissan e-NV200 electric vans trialled by British Gas over the last winter.

It’s all going to plan for Nissan: the e-NV 200 electric van has come through a series of well-publicised long-term operational trials with flying colours and has now received a 100-van order from trial partner British Gas, ahead of the e-NV200’s official launch in June.

The order was announced at the start of the CV Show in Birmingham today, and is part of British Gas’ wider commitment to electrify 10% of its 13,000-strong fleet by 2017. British Gas will receive 50 vans as soon as possible and a further 50 by the end of 2014.

As I have been saying for many years, the logical opportunity for mainstream adoption of electric vans isn’t the private car market, where usage is often inconsistent and unpredictable, it’s the van market — many vans operate on fixed routes and schedules which make range anxiety and charging requirements irrelevant.

British Gas’ winter trial of the e-NV200 was the UK’s largest electric van evaluation to date, and saw 28 e-NV200s cover in excess of 60,000 miles between them, to verify how the vans performed in winter conditions, during typical British Gas home services daily usage patterns. Proof of the trial’s success was that some drivers were reluctant to hand back their vans.

“We have been extremely impressed with the performance of the Nissan e-NV200 during our winter trial. The feedback from our engineers speaks for itself, with the majority saying they would be happy to keep the van permanently.

“Taking on 100 of these vehicles on a permanent basis demonstrates our continued commitment to leading the adoption of this technology amongst large vehicle fleets in the UK.  With technology and infrastructure improving all the time, we look forward to expanding this number in the coming years.”