The UK’s biggest annual road freight event, the CV Show, has taken place this week at the Birmingham NEC. If you didn’t make it along, here are a few of the van highlights from the show — including all the major new models due to hit our roads this summer.

Several of the major European van manufacturers chose to unveil new models at the show: 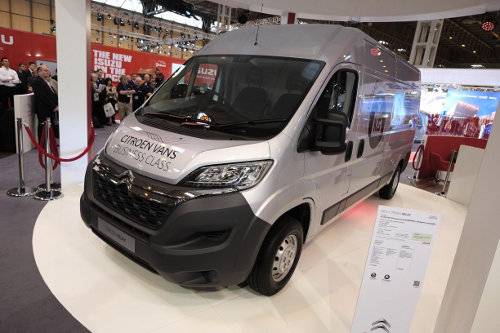 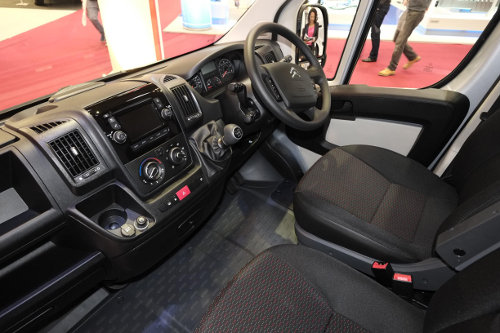 The new Citroen Relay is a clear evolution of the previous model, and will as before, also be sold as the Peugeot Boxer (with the same 2.3HDi engine as the Relay) and as the Fiat Ducato (with a different range of engines). I have to say the cab of the new Relay looks good, in my view a little better than that of the new Fiat Ducato: 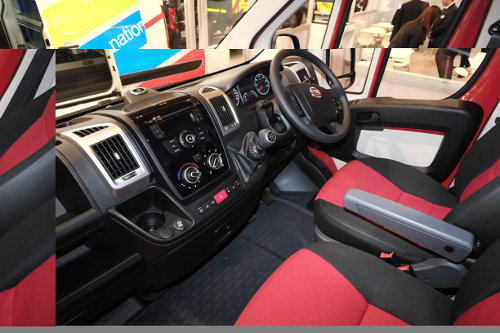 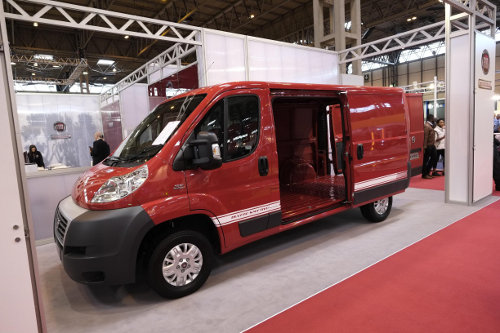 Fiat also had several Doblo models on show, including the Doblo Cargo XL, in Royal Mail trim, and a Work Up pick-up model, courtesy of Balfour Beatty. The Work Up seems a useful idea, and has been around for a while now, but doesn’t really seem to be very popular with buyers, judging from how few I’ve seen: 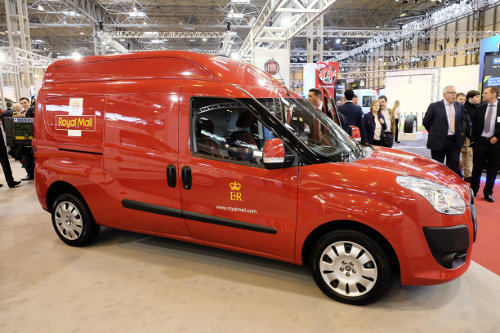 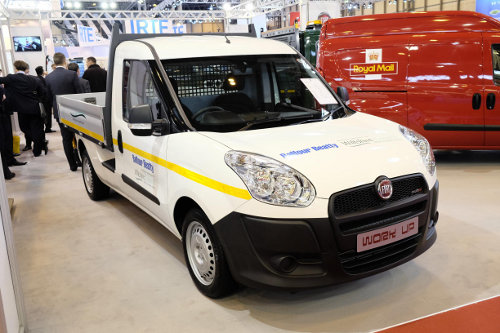 Moving on, one of the undisputed highlights of the show was the all-new Ford Transit. This full-size large van will take the fight directly to the sector heavyweights, the Mercedes-Benz Sprinter and Iveco Daily, as well as (I suspect) outclassing the Ducato et al. Can’t wait to see more when they hit UK roads this summer: 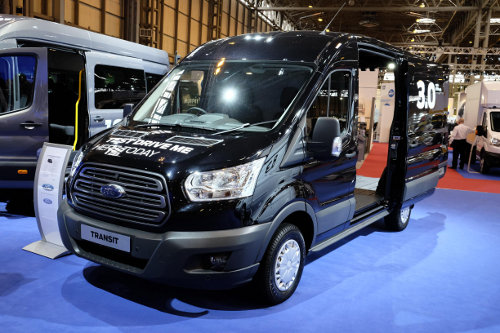 Ford has apparently already received 10,000 orders for the new Transit, which went on sale in December, and the van seems likely to repeat the launch-year success of the Transit Custom, which was displayed in several tempting guises at the show: 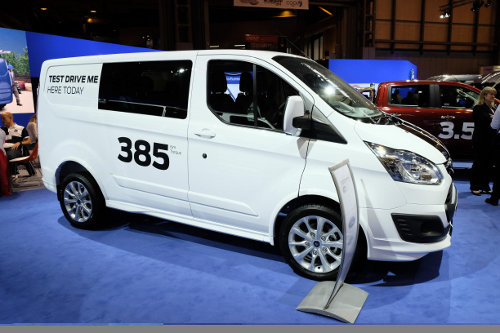 In a move that suggests Ford believes the Transit Custom has serious potential in the leisure market, the firm also had a campervan conversion on its official stand. I’m not sure if this is the Wellhouse Leisure Terrier conversion, but I suspect it is: 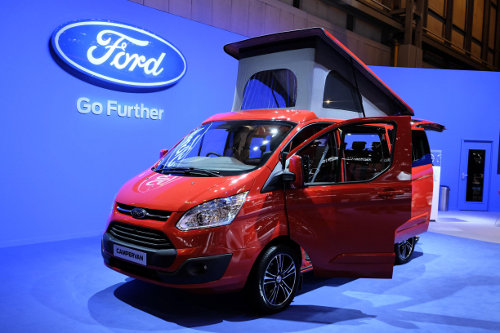 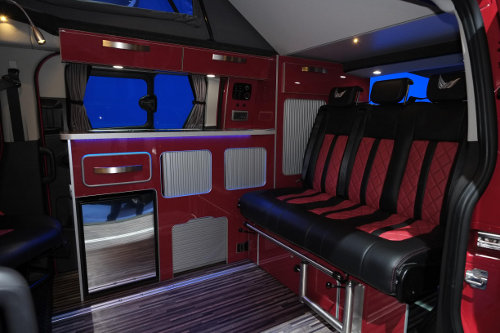 If buyers can get over the badge on the bonnet, then this classy and well thought out conversion should certainly give the VW establishment a run for its money. It will take some doing, though, and I’m not sure I would bet on it — the VW badge is almost like a religion in the campervan world — and I speak as the owner of a Transit campervan conversion!

Moving on from the blue oval, there were several other tasty treats on display, too.

Nissan seems to be on the cusp of delivering an electric van that can break into the mainstream market. The firm opened the show by announcing that it had received a 100-van order from British Gas for its e-NV200, and this van’s extensive test program has meant that large fleet operators have been able to prove the operational and economic viability of electric vans, in a way that they perhaps haven’t been able to before.

I predict big things for electric vans, and the e-NV200 in particular: 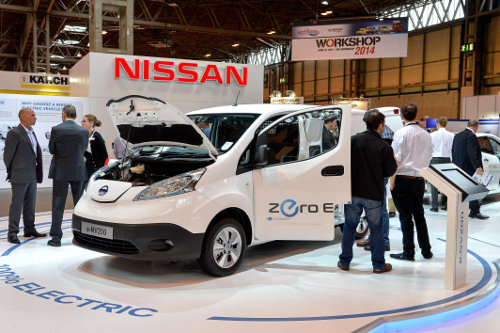 Nissan’s European partner, Renault, had a big presence at the show, including an outdoor stand featuring a wide range of automotive exotica.

In the background you can see some kind of open-wheeled contraption with wings (I think some German bloke drives it at weekends) but I was more interested in this beauty — it’s an Espace, Jim, but not as we know it: 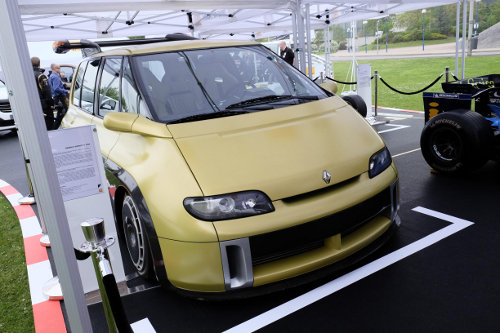 More seriously, it was an important show for Renault, as it marked the launch of no fewer than two new van models, the all-new Trafic, and the heavily-revised Master: 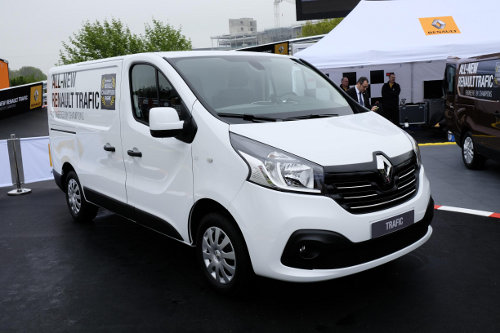 The Trafic looks good, an the sophisticated appearance (in my opinion!) continues inside, too: 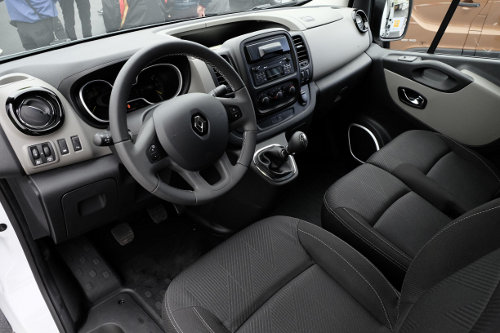 The new Master was also display. As with the outgoing Master, this van will also be sold by Nissan, badged as the NV400, and for the first time will be available in an extra-long wheelbase, high roof model with single rear wheels that’s aimed squarely at the courier/light haulage market (not the van in this picture, which shows a crew van model): 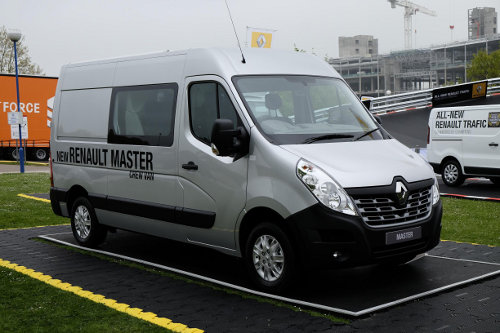 Echoing Renault was Vauxhall, which rolled out the new Vivaro. Naturally it’s very similar to the Trafic, as it’s basically the same van, but in my view Renault’s interior is much more appealing than Vauxhall’s take: 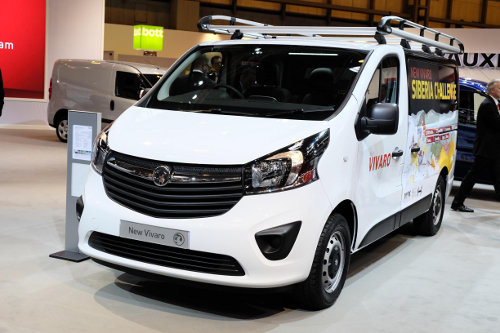 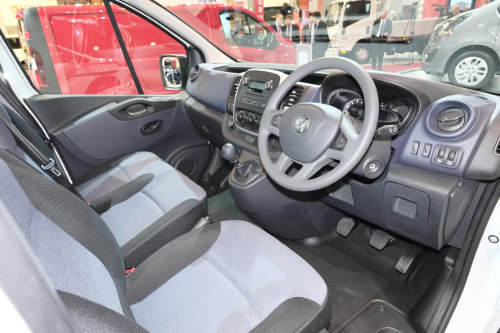 Finally, I’ve included a bit of 4×4 exotica for those of you who like a bit of the muddy stuff. Isuzu was out in force with its D-Max pick-up and range of light trucks, but I thought that these two were a little more interesting. 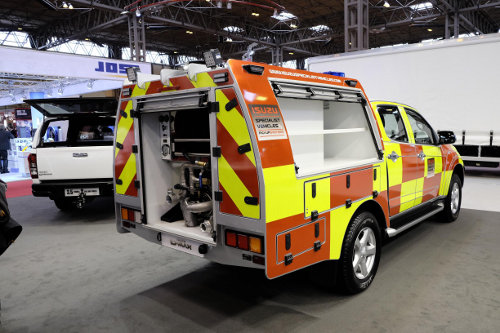 Isuzu can supply a number of conversions, such as this D-Max in Fire & Rescue guise.

The D-Max also has a head for heights, and makes an admirable off-road capable cherry picker: 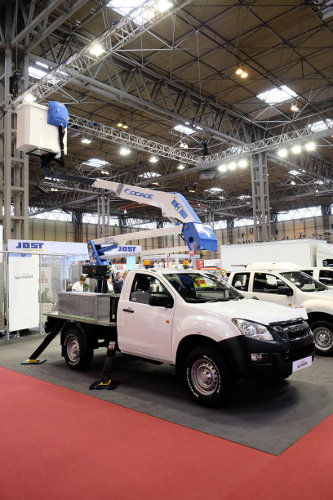 On which note, I will wrap this up — have a great bank holiday weekend!