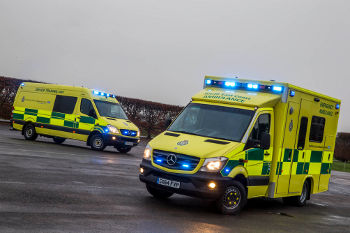 One of SECAmb’s new driver training vans, alongside a new emergency ambulance.

Although chassis cab 5.0t Sprinter ambulances remain at the heart of the fleet — SECAmb operates 300 of these A&E ambulances — the trust has started to introduce a wider range of other models and specifications for different duties.

One area of emergency care where patients may notice a difference is in SECAmb’s new fast response vehicles. Over recent years, ambulance trusts across the UK seem to have standardised on well-specified medium-sized estate cars for paramedics, but the downside of these is that they provide no room for even basic treatment, which often results in an ambulance being called to transport the patient to hospital.

To help alleviate this problem, SECAmb has replaced a number of its fast response cars with 2.8t Vito 116CDI Dualiners — panel vans with a second row of seats and purpose-built interiors which allow patients to be treated for minor wounds and injuries at the scene, inside the vehicle, eliminating the need for a trip to A&E.

SECAmb has also introduced a new class of vehicle for driver training: five 4.0t Sprinter 419CDI panel vans are now operating as dedicated Driver Training Units. Fitted with a variety of cameras and motion sensors, the vans have been specified with a second row of seats and onboard monitor and video equipment, which allows multiple students to receive tuition at once and to watch back their driving immediately after manoevures have been completed.

Elsewhere in SECAmb’s fleet, five critical care ambulances have been introduced: these are based on the standard box body ambulance specification, but carry additional equipment for treating the most seriously ill patients. The trust has also added a number of Sprinter and Citan panel vans to its fleet for logistics and support use.

As you may have noticed, all of these vehicles are Mercedes-Benz — commenting on the choices, Justin Wand, SECAmb’s Head of Fleet Operations, said:

“However, while acknowledging the need for vehicles of different sizes and specification, we also wanted to standardise on a consistent, reliable platform. Mercedes-Benz was the obvious partner, not least because in the Sprinter, Vito and Citan its range includes a model which is right for every application.

“Plus, of course, we already know from long experience that on a whole-life cost basis, taking account of factors such as fuel economy, reliability and maintenance, Mercedes-Benz products represent better value than those of its competitors.”

As we’ve seen before, Mercedes customer always appear ready to sing the praises of the three-pointed star, and their loyalty is often notable.