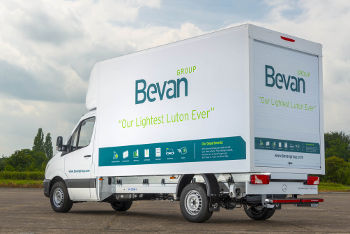 I wrote recently about the issue of payload (maximum load weight) in 3.5t vans — and highlighted how a luton van will typically have a slightly lower payload than the equivalent panel van.

Using a luton van — especially with a tail lift — is typically a trade off between gaining a wider, completely flat load deck and losing a little payload. Unsurprisingly, van bodybuilders are constantly trying to minimise the weight of their luton bodies without sacrificing any durability or strength.

One of the best payloads available currently appears to come from Bevan Group’s lightweight luton body, which when fitted to a 3.5t Mercedes-Benz Sprinter chassis, provides a payload of 1,250kg.

I’m not sure if this is the very best in class, but it’s certainly a very competitive payload for a 3.5t luton, although it’s worth noting that this is (I think) without a tail lift, which would knock around 200kg off this payload figure.

Bevan is one of the bigger names in the UK bodybuilding industry and has capitalised on its scale to create a very efficient process for obtaining whole vehicle type approval (WVTA) for its new models. Since the WVTA rules were changed last year, Bevan has already secured 140 approvals, thanks in part to having a dedicated approvals team, which works closely with the Vehicle Certification Agency (VCA), which is part of the Department for Transport.

The firm is now extending this concept further with its Bevan Passport scheme, which makes the services of Bevan’s WVTA team available to smaller bodybuilders, who don’t have access to the same kinds of resource and may not find it easy to complete the WVTA process efficiently themselves.

The end result is a Bevan Passport, which “proves that a vehicle meets or exceeds all of the requisite environmental, safety and security standards”, according to Lee Dimmock, Bevan’s Group Operations Director and the leader of the firm’s WVTA team.