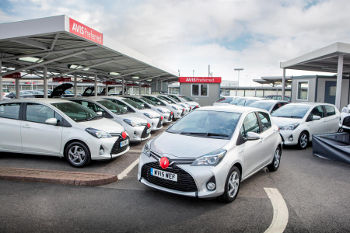 The Yaris Hybrid cars will initially be available at Heathrow and Stansted airports, plus major central London locations. Availability will gradually be extended to Gatwick, Luton and other key south-east locations.

As full hybrids, the Yaris Hybrids are currently exempt from the London congestion charge and boast CO2 emissions of just 75g/km. At low speeds, the cars automatically switch to full electric mode, with the engine firing up as needed at higher speeds.

Will the Avis example encourage any van hire operators to make the switch?

One problem is that with the exception of the 4×4-derived Mitsubishi Outlander PHEV hybrd (plug-in electric vehicle hybrid) — which isn’t really a normal van — there aren’t currently any production hybrid vans. All the available models are either all-electric or petrol/diesel, not hybrids.

However, given that PSA Peugeot Citroen has a diesel hybrid system which is available on cars such as the 3008 and 508, it’s not an impossible stretch to imagine that this system could be adapted to fit the Peugeot Expert van, improving its urban emissions credentials.

There’s also the Ashwoods Hybrid Transit, an aftermarket hybrid conversion for the Ford Transit that’s won widespread acceptance and makes a credible claim to reduce emissions and fuel consumption by around 15%.

Hybrid technology seems to be gaining widespread acceptance in the car world, and overcomes the core objections which face electric cars — they aren’t suitable for long distances or as an only car. I don’t see any reason why hybrid technology can’t start making in-roads into the van market, especially as cost-wise, hybrid vehicles are increasingly on a par with non-hybrid alternatives, especially when fuel and emissions costs are factored in.