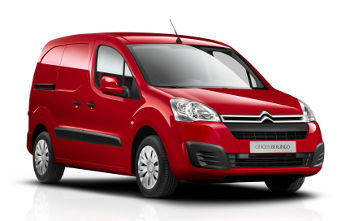 The new Citroën Berlingo and Peugeot Partner small vans will make their UK debuts at the CV Show 2015, which takes place at the Birmingham NEC from 14-16 April.

While the styling and specification of both vans have been tweaked, the big change is that both models will now be available with Euro 6 engines.

Euro 6 is the latest European standard for emissions control and is particularly relevant for diesel engines at it includes much tougher legislation on nitrogen oxide (NOx) emissions.

These are responsible for respiratory and other health problems in urban areas, and while NOx levels should have fallen under Euro 5, it was found that the technology used for Euro 5 didn’t work very effectively in urban environments*. As a result, NOx levels didn’t fall by as much as expected following the widespread adoption of Euro 5.

– Stage 1: an oxidisation catalyst converts the unburned hydrocarbons (HC) and carbon monoxide (CO) in the exhaust into water and carbon dioxide (CO2)

– Stage 3: a particulate filter then eliminates 99.9% of particles in the vehicle’s exhaust emissions

BlueHDi powered New Berlingo vans have a 17-litre AdBlue tank, which will last for up to 14,000 miles, depending on the type of vehicle operation.

The Peugeot Partner is of course essentially the same van, and will have a near-identical range of engines. Both firms will wisely also offer a 1.6-litre petrol engine, which should win favour with low mileage urban operators and perhaps off-road users, such as airports, where speeds and distances are very low and do not allow a modern diesel to warm up and operate efficiently.

Peugeot will also continue to offer the Partner Van Electric, an all-electric model, while there will be a new Berlingo Electric Van (presumably using the same electric drivetrain).

What else is new?

I’ve written about both new vans previously (Berlingo & Partner), so I won’t repeat everything here, but to summarise, the main enhancements to each model are technological and safety related: Active City Brake, Hill Start Assist, tyre pressure sensors, cruise control and front and rear parking sensors and camera are all available as options, while the 2/3-seat cab seating format will continue to be available.

Payloads for the updated vans range from 625kg to 850kg, while inside a 7-inch touchscreen media system will also be available for the first time.