Few vehicles are more versatile than medium-sized vans, like the Ford Transit Custom, which fulfils functions as varied as luxury VIP transport and builder’s van.

While the Transit Custom does have peers, few offer the same mix of reliability, price, volume availability and specification choice that Ford can offer. Unsurprisingly, the Transit Custom is becoming one of the most popular choices as a van and people carrier with UK police forces.

Nowawdays, emergency services club together in regional consortia to get the best possible deals when buying vehicles. In a recent ordering round, Ford received an order for 1,100 new vehicles, 760 of which were Transit Customer medium vans. A further 110 were smaller Ford Transit Connect vans, while 30 Ford Ranger pick-ups were also included.

The firm’s Kuga is also becoming a popular choice thanks to its optional 4×4. Of the 1,100 vehicles ordered, 200 were Kuga models. 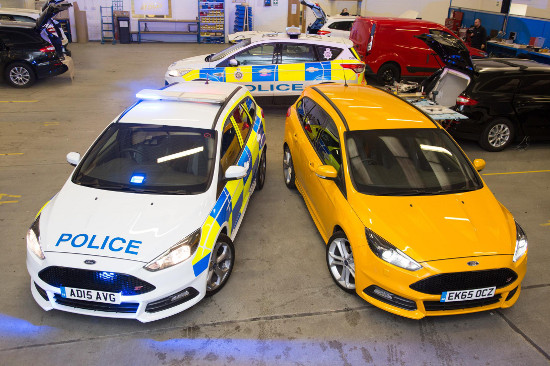 Work in progress at the Ford Special Vehicl Preparation unit

Roughly half of the Transit Custom vans will be supplied by Ford as cell vans. The conversions will be undertaken by Ford’s Special Vehicle Preparation (SVP) operation in order to make the van capable of transporting two detainees and up to five police offers.

“Ford has a long history of working with emergency services spanning 50 years,” said Terry Adams, Ford direct sales manager.  “The stylish and capable Ford Kuga has established itself as their rural beat car of choice with all-important all-wheel drive necessary for winter conditions.”

British Transport Police, South Wales and Dyfed Powys are other forces with Ford Kugas on their fleets.  The market-leading Ford Transit Custom is used in every police region in the country, with roles as cell vans, crime scene units, dog carriers and camera vans.

The Transit Custom is winning fans elsewhere, too. Ford has recently been chosen as the exclusive supplier of cars and vans for the Team Sky cylcling team. While the team’s mainstay for race work will be the Mondeo estate, two Ford Transit Jumbo’s will be used to transport all of the team’s gear to and during races, while two nine-seat Tourneo Customs will be used as minibus shuttles to transport team members as needed.