In 2015, Vauxhall sold 13,000 vans small businesses. This made the Luton-based firm the top choice among retail buyers — van owners who buy from dealers, rather than direct from the manufacturer. 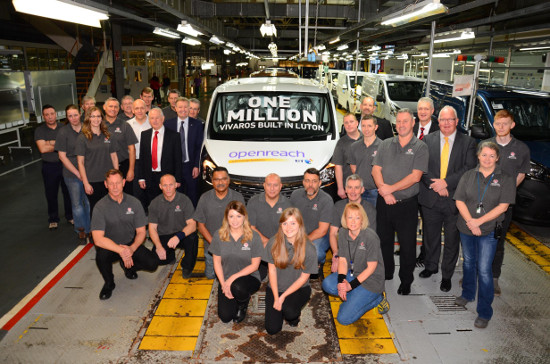 Although the Vauxhall Combo is a popular small van, at the heart of the firm’s success with retail buyers is the Vauxhall Vivaro. More than 27,000 Vivaros were sold last year, and the van was the firm’s best-selling retail model.

To put the Vivaro’s popularity into context, sales of Vauxhall’s largest van, the Movano, rose by 28% in 2015. But the company still only sold 5,000 of them. The Vivaro really does define Vauxhall’s commercial offering, in my opinion.

However, despite last year’s strong sales performance, Vauxhall’s van sales are still dwarved by those of the other big ‘British’ CV brand, Ford. More than 106,000 vans bearing the Blue Oval were sold last year, giving Ford a 24.8% share of the UK CV market.

Drivers wanting to buy a van that’s really British should stick with the underdog, though. Vauxhall recently celebrated the one millionth Vivaro van built at its Luton plant. The new Vivaro has more British-made parts than ever and is the lynchpin of UK commercial vehicle production.

1 thought on “Vauxhall vans are top choice for retail customers”