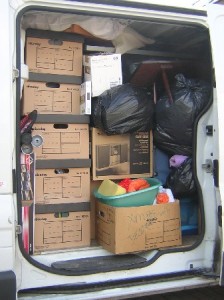 Overloading vans is a big problem. The number of convictions for overloading rose by 19% from 290 to 345 during the last financial year, according to government figures. Although this figure is pretty low, it’s worth noting that the Driver and Vehicle Standards Agency (DVSA) is increasingly good at identifying and targeting overloading vans.

If you drive around in a swaying van with a saggy rear end (no pun intended), then expect to be stopped and perhaps fined. The average fine for van overloading during the 2014/15 tax year was £751.74. That’s a fair chunk of money.

I suspect that the van overloading is probably made worse by the fact that many van drivers and operators are not in the transport business — vans are just a means of shifting their stuff from job to job.

The SMMT estimates that implementing a HGV-style licensing regime for van operators could cost businesses £2.6bn. That’s not something any of us want to face, so as van owners and users it behoves us to make sure that we aren’t the cause of the problem.

Learn about the weight of the stuff you carry in your van, don’t carry equipment or materials that aren’t needed and think of driving a van as a serious part of your job. If you’re unsure where to start and are looking for more tips, check out this DVSA video on overloading:

Van operators and drivers are not subject to any of the regulation and training requirements imposed upon HGV operators. And that’s good news — modern vans are safe, easy to drive and extremely useful.

But with a record 4m vans now in use on UK roads, we think it may now be time for drivers and employers to take a stricter approach to compliance.