It’s been a few months since we looked at the state of the UK commercial vehicle manufacturing industry. But the trends we saw last year appear to remain in place.

Total commercial vehicle manufacturing in the UK rose by 10.8% to 7,502 units in January compared to the same period last year, according to the latest figures from the Society of Motor Manufacturers and Traders (SMMT).

This strong growth was down to European buyers, who purchased 5,060 new vans and trucks during the period, a 45.9% increase on January 2016. Production to meet orders from the UK market fell by 26% to just 2,442 units.

One reason for this surge in export sales may be that the weaker pound means UK exports are cheaper for eurozone buyers. A second reason may be that key markets in Europe are starting to show signs of economic recovery, lagging the recovery we’ve seen in the UK over the last couple of years.

The shifting pattern of demand between home and export markets in recent years can be seen in this graph: 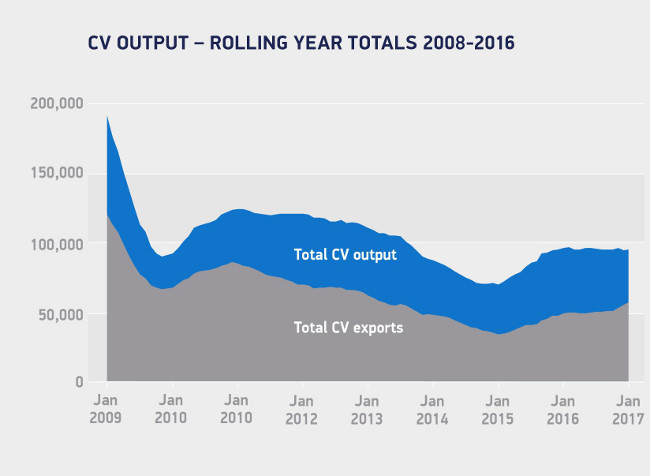 The blue effectively represents home demand, which has recovered strongly after hitting a low in late 2009. Export demand took longer to recover but has been growing steadily since January 2015.

“CV production got off to a great start last month, following a relatively stable year for the sector. The strong performance was driven by continued overseas demand, with 96% of all exported CVs heading for Europe. For this performance to continue, government must secure the competitive trading conditions that are so vital to the sector’s success.”

Clearly Brexit has the potential to be a big issue for the vehicle manufacturing sector. With Vauxhall plants thought to be under threat if French group PSA buys General Motor’s Opel business, the next couple of years could be a nail-biting time for workers in the UK’s highly-respected automotive sector. Let’s hope for the best.