The Commercial Vehicle Show at the Birmingham NEC is one of the biggest events of the year for UK van operators. I went along last week on behalf of vanrental.co.uk to find out what was new in the van world in 2017.

Here’s my roundup of new and unusual van models — plus a few others — from this year’s CV Show.

Peugeot had a sizeable stall at the NEC and was showing a number of vans in well-known liveries. This Royal Mail Partner Trek model has raised ground clearance and is available with an electronic limited slip differential to provide additional traction on muddy tracks and the like: 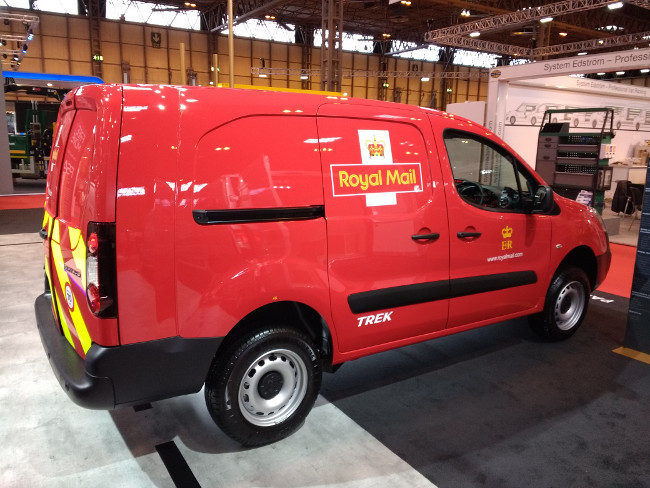 Over on the LDV stand, the vans on display bore clear traces of the DNA of the little-lamented LDV Maxus.

However, LDV is now owned by Chinese firm SAIC and is targeting the value end of the market. A basic V80 SWB model starts from about £13,200 according or £168 per month, according to the My LDV website. By way of contrast, the current Ford Transit starts at £23,120 +VAT… Could be worth a look if you’re on a budget: 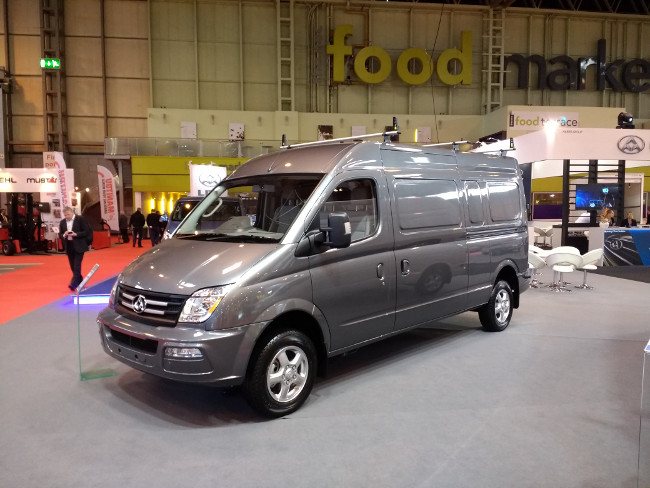 The LDV V80 at the CV Show. An all-electric model will also be available shortly. At £10k less than a Ford Transit, these could gain traction in the UK market.

Most tipper vans sold in the UK are full-size 3.5t models. But companies such as converter Ingimex believe there is a market for smaller models, such as this Volkswagen Transport tipper conversion: 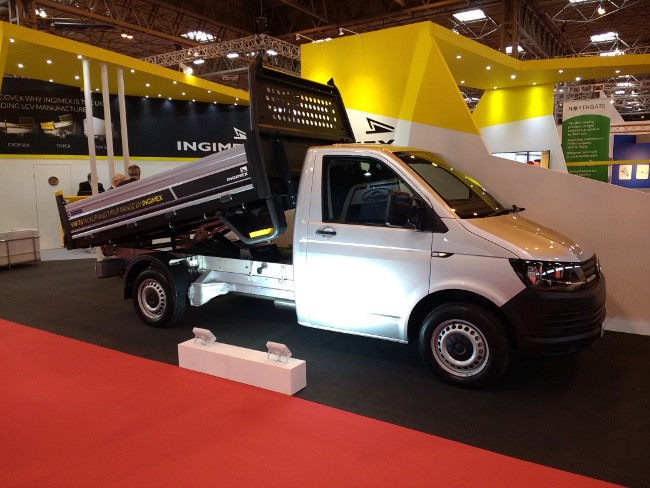 Renault didn’t bring along any of its trucks, but the French firm did have a big display of LCVs at the CV Show, including a the UK debut of the Master Z.E. electric van and a rare chance to see the forthcoming Alaska pickup. 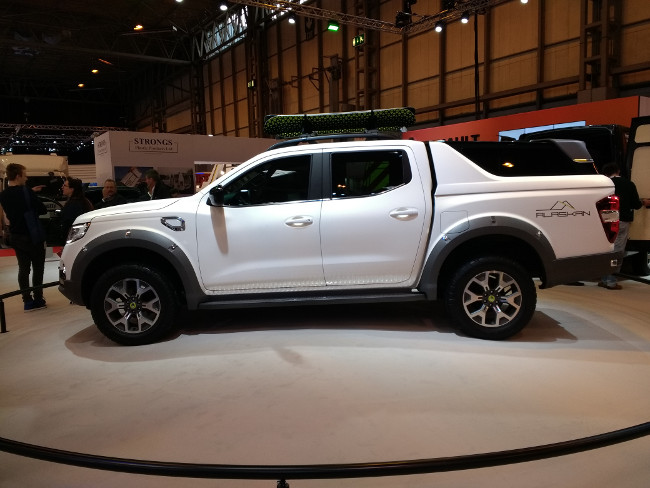 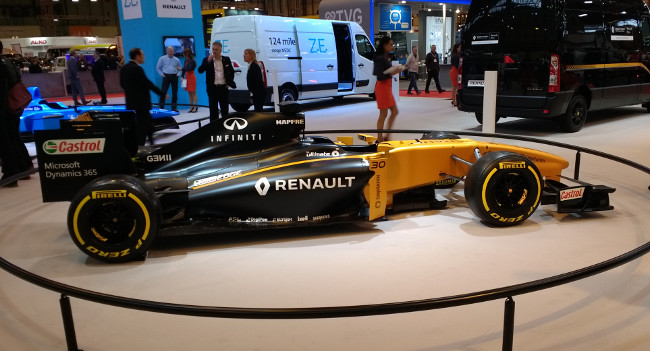 The F1 theme continued with the launch of the new Renault Formula Edition trim level for its Kangoo, Trafic and Master vans. Like the Ford Transit Sport models, with which they will compete, the differences lie in aesthetic details and upgraded kit levels. The engines will be the same as those found in the standard vans: 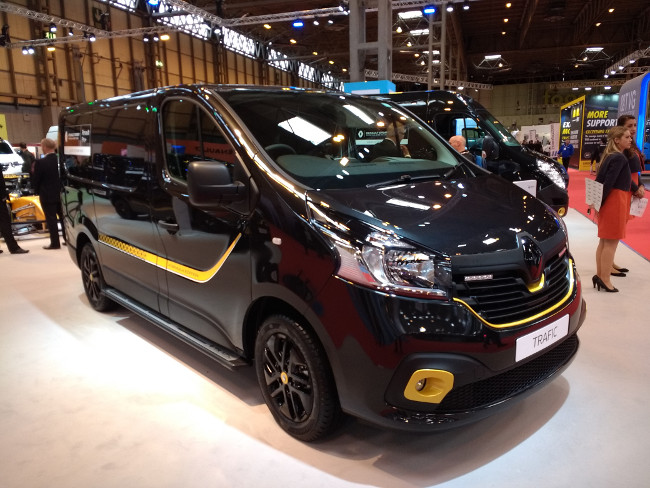 The new Renault Trafic Formula Edition model was launched at the CV Show. 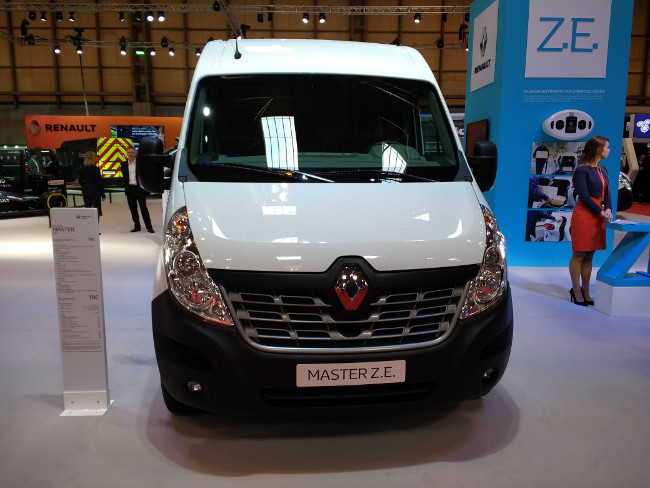 The new 100% electric Renault Master ZE was unveiled at the CV Show. It promises a range of up to 124 miles and should be on sale by the end of this year.

Over on the Vauxhall stand, the firm’s concept race van Vivaro was on display, fitted out with a tasty selection of conversion kit: 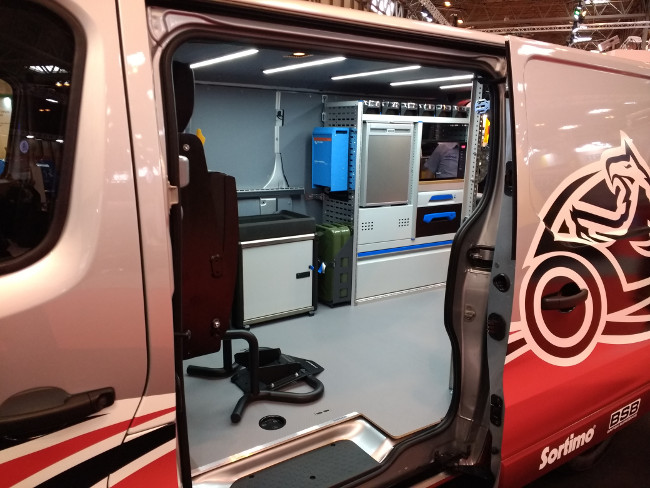 This Vauxhall Vivaro race van concept is designed to carry a single motorcycle plus provide workshop facilities and some creature comforts for the rider/mechanic. Some nice kit is evident — a Waeco fridge, Sortimo racking plus what looks like an expensive Victron inverter.

A steady stream of visitors were keen to scale the heights to the cab of MAN’s new TGX XXL long-haul tractor unit. But for most of us, the closest we’ll come to driving a MAN is getting behind the wheel of the firm’s first can, the MAN TGE.

Along with its stablemate the new Volkswagen Crafter, the TGE was one of the top launches at the show: 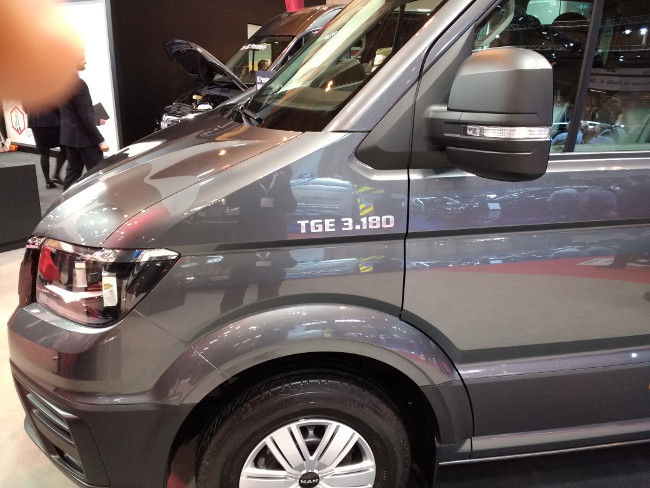 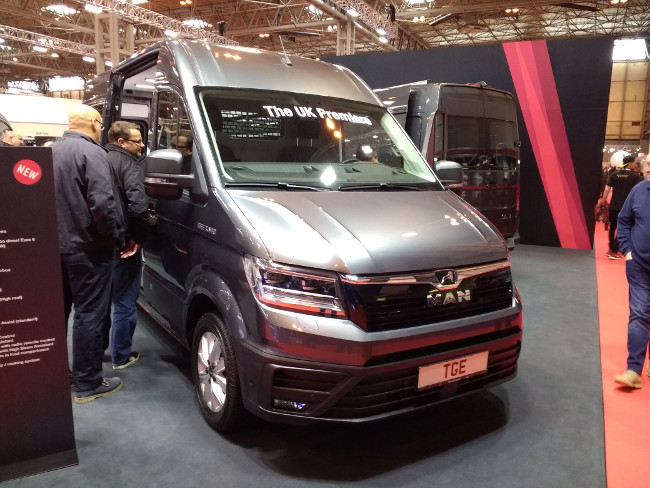 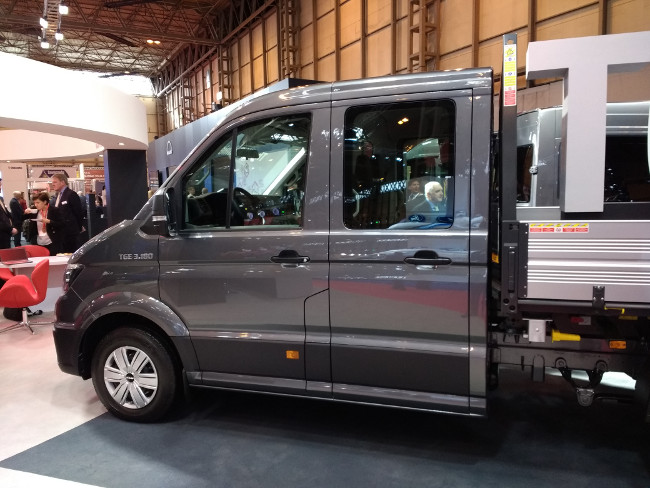 The MAN TGE was also on display in crew cab dropside format.

Moving on to the Volkswagen stand, the TGE’s sibling, the new Crafter, was on display. It’s an important model for VW, as this new model is an in-house design, rather than a re-engined version of the Mercedes-Benz Sprinter (Mercedes, by the way, was conspicuously absent from the CV Show). 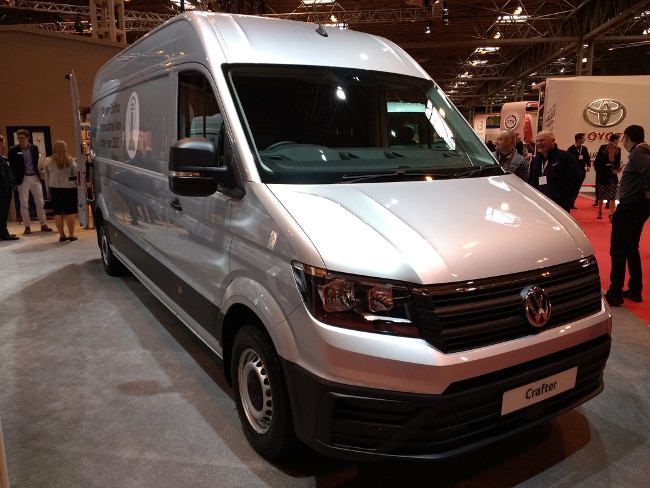 The new Volkswagen Crafter at the CV Show 2017 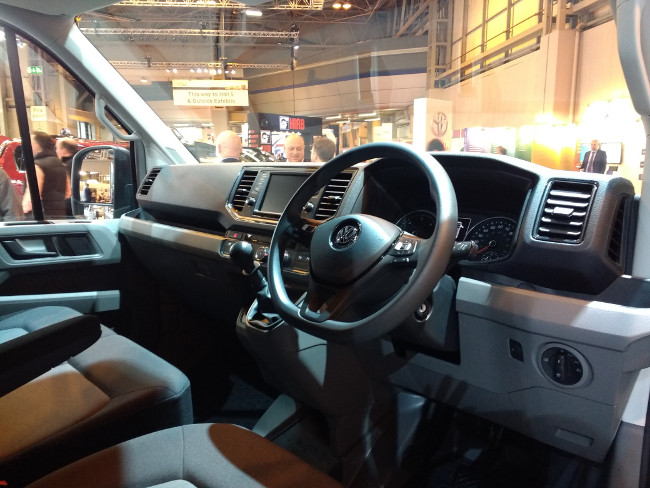 Inside the cab of the new Crafter: it’s unmistakeably a Volkswagen

Over at Toyota, a range of new factory-approved conversions were on display, including this Hilux Tipper: 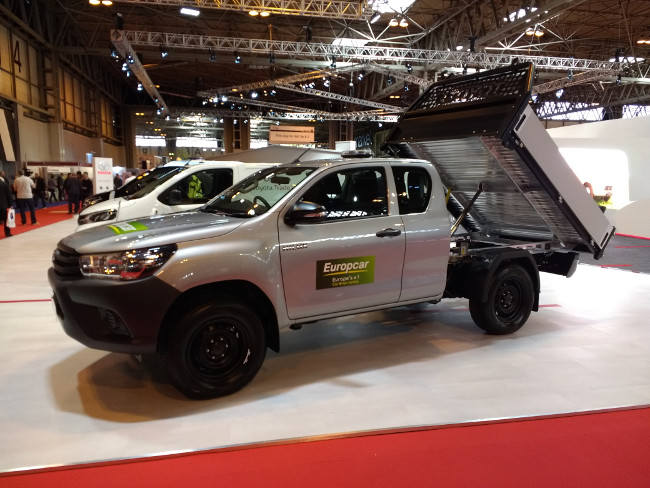 Toyota was showcasing its new range of Trade Plus and Authorised Converter models. Seen here is the Hilux Tipper in Europcar colours. Will any of these feature on Europcar’s UK van rental fleet?

And now for something completely different. Auction and remarketing group Manheim was at the CV Show and had something very special on their stand. The high-tech Spy Van was owned by HMRC and used — presumably — to spy on potential tax dodgers until 2014.

In 2015, Manheim’s LCV specialist James Davis took possession of the van and decided to restore it to its former glory before auctioning the Spy Van for charity to raise funds for the Alzheimers Society.

Here are some photos of the finished result — on Monday 22nd May, the Spy Van will be sold at Manheim Auctions Shepshed without reserve. So if you’re interested in making a bid, there’s still time. 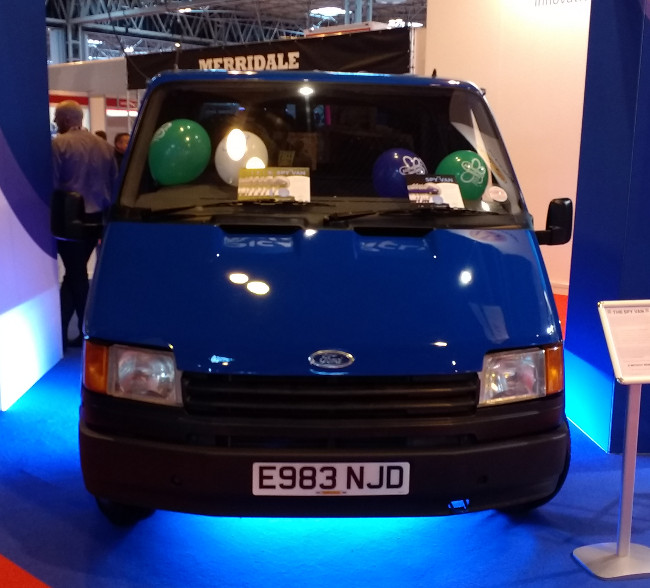 The Spy Van is a former HMRC undercover vehicle. Fitted with a range of high-tech kit (see below) it’s been restored by Manheim LCV expert James Davis and will go under the hammer to raise funds for Alzheimers Society on 22 May 2017. 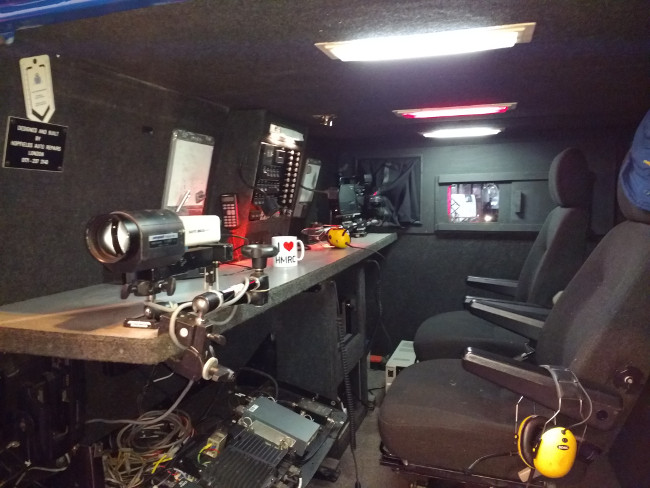 Inside The Spy Van. Tech specs included three charging circuits and front windscreen wipers that could be controlled from the rear in order to keep the view clear for the van’s spy cameras!

Last but not least, no CV Show visit would be complete without a few tasty classics, so here are some of the highlights from 2017.

Citroen’s immaculately-restored Type H van drew a lot of admiring glances. This classic was made from 1947 until 1981, so the model celebrates its 70th anniversary this year. This le coq sportif model has been fitted out as a bicycle workshop and will be used as a promotional vehicle for cycling events in France. 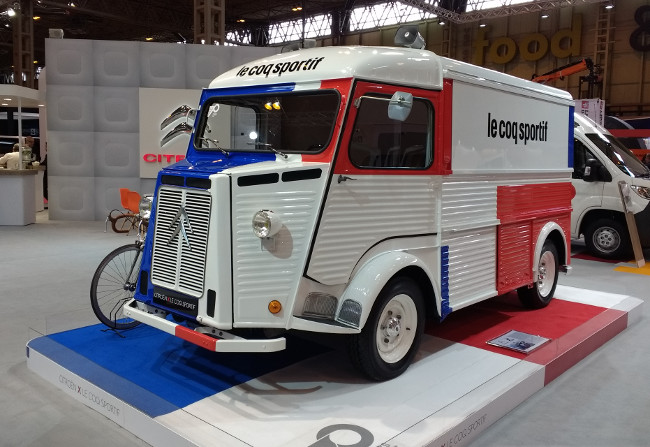 Back in the day (c.1986), this DAF 2800 Turbo would have been a top-of-the-range long haul truck. The TIR plate suggests this model saw plenty of European work in the days before open borders…. (post Brexit, will hauliers be dusting off their TIR plates once more?) 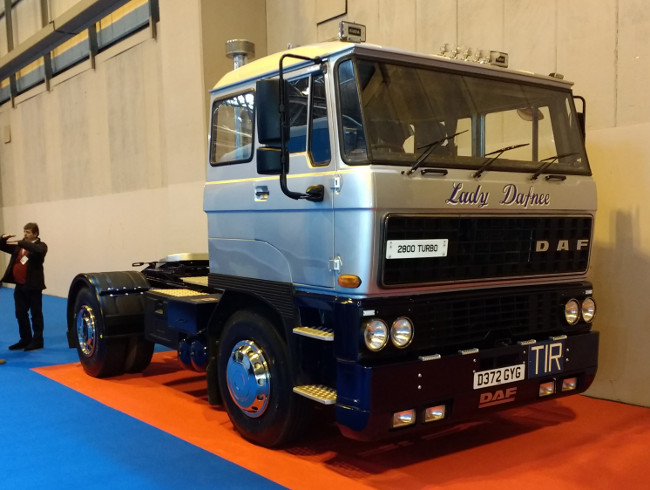 This E.M. Rogers Volvo F12 is of a similar vintage, but the high roof and Scandinavian quality would have made it an even more desirable steed: 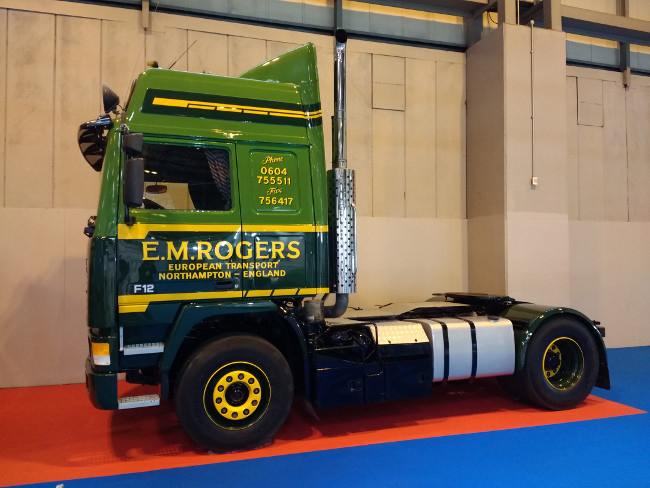 Finally, it’s not a van but it would probably have outdriven anything else at the show. A 1980s Palletforce Ford Escort rally car in all its glory: 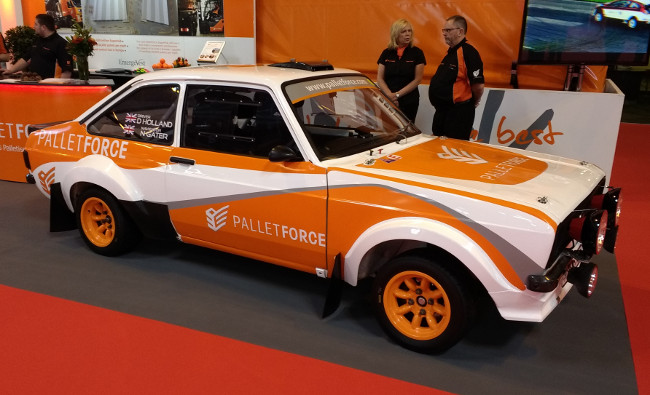 This 1980s Palletforce Ford Escort rally car was on display at the CV Show 2017.

That’s about it for this year. I hope you’ve enjoyed my photo highlights from this busy show. Roll on 2018…