Weak domestic demand pushed commercial vehicle manufacturing output down by 4.3% in March, according to the latest figures from the Society of Motor Manufacturers and Traders (SMMT).

The trade body said that despite a 7.8% increase in export demand for UK-built vans and trucks, an 18.4% drop in domestic demand led to an overall decline in output. This pattern is a continuation of the trend seen so far this year — home demand has fallen by 25%, offsetting a 21.2% rise in export demand:

The message from SMMT chief Mike Hawes was that exports to the EU remain of vital importance to UK automotive firms:

“Despite the expected fall in domestic demand following extremely high levels of growth in the previous two years, UK CV production remains positive and continuing growth in overseas demand highlights the quality and competitiveness of our products. With some 90% of CV exports destined for the EU, we urge government to strive to deliver a free trade deal that will maintain that competitiveness and secure this industry’s future success.”

This graph shows how exports have been offsetting falling domestic demand over the last year: 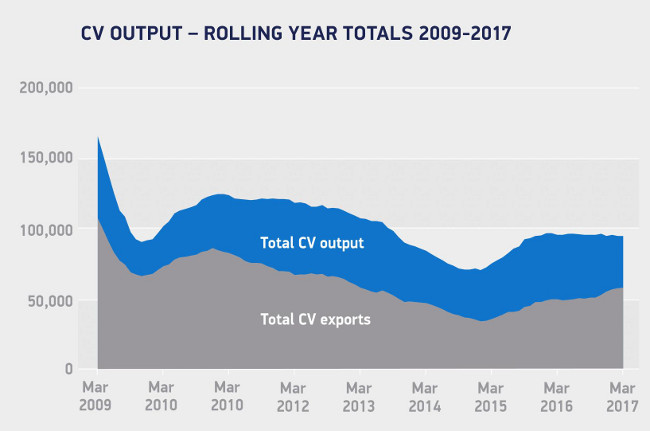 According to the SMMT figures, exports now account for 64.3% of all UK CV production, the highest level for seven years. Expect more on this topic as Brexit negotiations get underway.