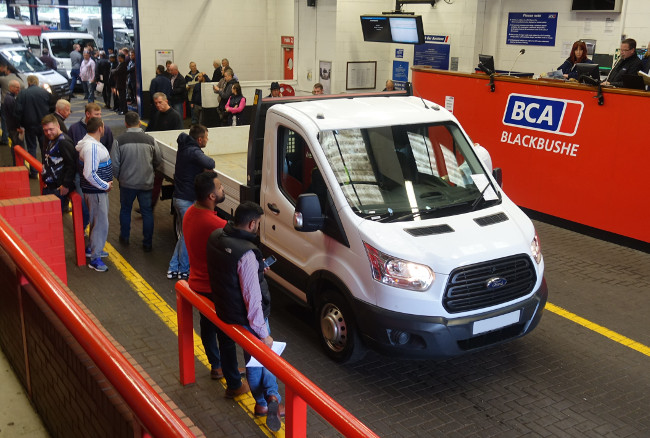 The average used van sale price at auction fell from £6,553 in July to £6,420 in last month. However, some or even most of this decline may have been due to a reduction in used van volumes from daily rental fleets.

The big van rental companies supply a significant proportion of used vans under three years old. Whereas many big fleets operate vans for 3-4 years, hire companies often have shorter replacement cycles. This is due in part to their relationships with vehicle manufacturers, who allocate a significant amount of supply to rental fleets each year at preferential prices.

BCA’s figures show that the average age of the vans sold rose by one month in August relative to July. Although a small difference, I’d suggest this could explain the £133 price fall seen last month:

“While the headline average figure declined in August, demand remained strong and sold volumes improved, month-on-month.   Dealer PX values climbed sharply to a new record level, although there was some pressure on fleet & lease stock values, largely as a result of declining volumes from the daily rental sector, alongside some duplication of stock and condition issues.”

Mr Ward emphasised that as always, good condition is essential for strong pricing:

“Condition has always been the overriding factor for professional buyers and is critical to achieving first time conversion rates.  What buyers want is clean condition, well maintained stock with all the relevant documentation direct from vendors who price their vehicles realistically.  Taking condition out of the equation, there will always be demand for vehicles with rare and unusual specification, or those finished in a good retail colour with a high specification.”

The bulk of the used vans passing through BCA’s sales halls come from corporate and lease fleets, including rental companies. If we separate out the age, price and mileage figures for this sector of the market, we can see that average sale prices have risen slightly since last year, when measured against manufacturers’ list prices:

It seems that despite rising volumes, demand for good quality used vans remains strong. With new van registrations under pressure, it remains to be seen how the used market will fare as we head into 2018.