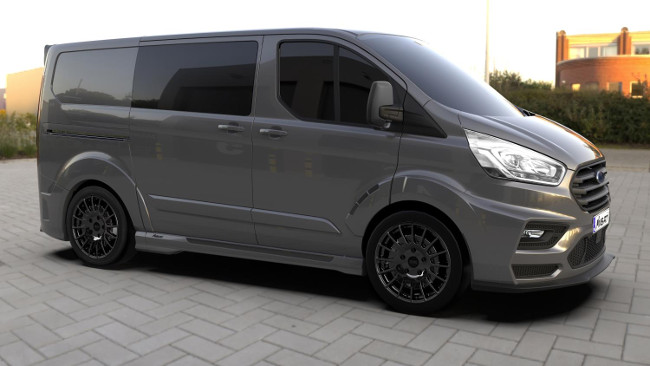 The MS-RT conversion of the Ford Transit Custom adds motorsport styling to the UK’s most popular van.

The Ford Transit Sport vans offer a decent slug of motorsport styling for van operators. But if you’re looking for something to take your next Transit Custom to the next level, the new MS-RT Transit Custom conversion from Welsh firm MS-RT could be just the ticket.

MS-RT says it’s taken inspiration from the Ford-backed M-Sport rally team to achieve “a performance version of the country’s most popular commercial vehicle”.

The modified van is based on the new 2018 Transit Custom, which is just starting to be delivered to early buyers. MS-RT Founding Director, Ed Davies, says their conversion creates a van owners will cherish:

“The new MS-RT Transit Custom takes an already excellent van and turns it into something really special, which owners are bound to cherish, and which businesses will use to make their brands really stand out.

On the outside, the van gets a comprehensive body kit, including a full front bumper and grill replacement with factory-fitted fog lights. There’s also an “extreme front diffuser” side sills, wheel arch extensions and matching rear spoiler and diffuser. The van also gets a British-made twin exhaust system and MS-RT branding.

In order to tighten up the van’s handling, these replacement wheels are paired with a set of Eibach lowering springs. These are paired with exclusive 18-inch Antracite OZ Racing alloys, but MS-RT has taken care to ensure the van retains its load-carrying ability.

These show-stopping wheels are shod with 103XL load-rated Hankook Ventus S1 evo2 tyres, which have been chosen to maintain the van’s 3.5t gross weight.

MS-RT’s modifications continue inside the van, which gets handcrafted nappa leather and suede seat facings, a MS-RT sports steering wheel and carbon fibre inlays. There’s even a MS-RT set of floor mats.

Under the bonnet MS-RT has specifies Ford’s range-topping 170PS EcoBlue 2.0-litre diesel engine This provides 405Nm of torque and can be paired with your choice of six-speed manual or automatic ‘box. A standard choice of cabin layouts is available, including five or six-seat crew cab, long or short wheel base and tailgate or twin rear doors.

Prices have not yet been announced — more information should be available in April 2018.