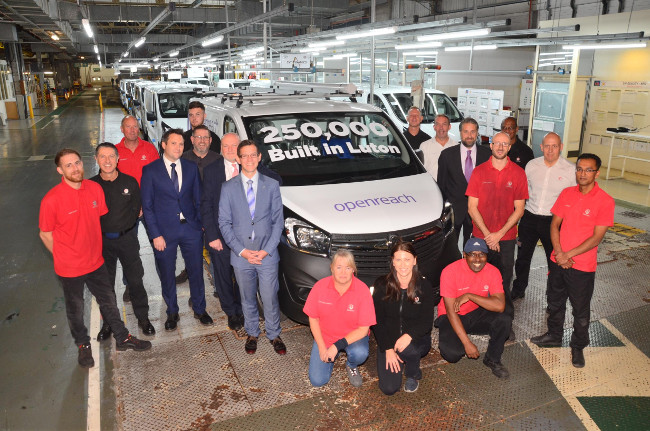 250,000 2nd generation Vauxhall Vivaro vans have been built at the firm’s Luton plant.

The Vauxhall Vivaro is a popular choice with van hire companies, tradesmen and fleets. Built at the firm’s Luton plant, it’s one of only a handful of mass-produced commercial vehicles that can honestly claim to be Built in Britain.

Staff at the Vauxhall plant recently celebrated the production of the 250,000th second generation Vivaro built at Luton. Fittingly, the landmark model was handed over to Vauxhall’s biggest Vivaro customer, BT Fleet Solutions.

BT Fleet has bought no fewer than 25,000 Vivaro vans from Vauxhall over the last 14 years, so it seems fair to assume that the model works well for the firm. Indeed, you’d have to assume that such a big buyer might even have had input into the design and specification of this popular model.

The current Vivaro could be the last ‘true’ mid-sized Vauxhall van. The sale of the Opel/Vauxhall business to Peugeot/Citroen owner PSA Group means that the replacement model is likely to built on a PSA platform that’s shared with other group models.

The good news is that PSA has already committed to build the new Vivaro at Luton and plans to upgrade the factory’s production capacity from 60,000 to 100,000 vehicles per year by mid-2019.