New van registrations rose by 21.7% in January, compared to the same period last year, according to the latest figures from the Society of Motor Manufacturers and Traders (SMMT).

The truck market also returned to growth — after the distortion caused by the introduction of Euro 6 emissions legislation and Type Approval Regulations — with sales rising by 38.6% in January compared to January 2014.

Mike Hawes, the SMMT’s chief executive, said the gains were a return to business as usual and indicated growing confidence in the economy:

“The truck market posted a strong return to form in January. Changes to Euro Standards and Type Approval Regulations in 2014 affected demand last year, and now we are starting to see a return to business as usual,” said Mike Hawes, SMMT Chief Executive.

The number of vans registered this month has once again increased, reflecting raised levels of business confidence and demand for a range of efficient, well equipped models. Successes in both markets have seen the total commercial vehicle market grow significantly for a ninth consecutive month.”

As the graph below shows, new van registrations have now risen by around 80% since the start of 2010: 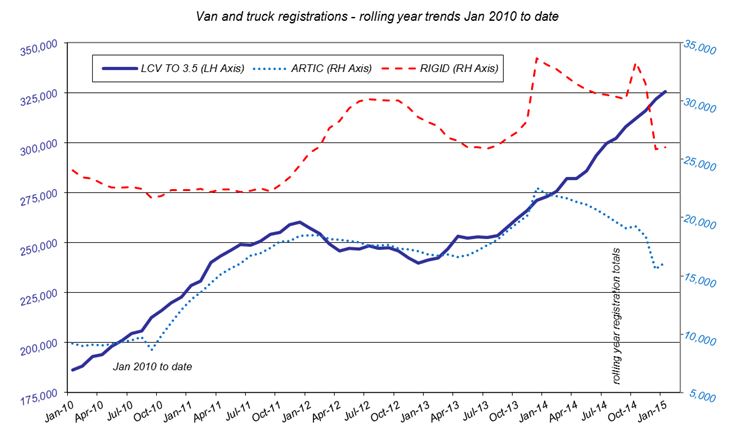 Which vans are the big sellers?

As usual, growth in van sales was not evenly distributed. The biggest gains in percentage terms were in the 2.0-2.5t category, where new registrations rose from 2,458 units in January 2014 to 4,006 units last month.

What about the second-hand market?

The obvious question, of course, is how many of these new sales — if any — are stealing sales from the used van market.

I’ve been speculating on this issue for a while, and although I believe the majority of new van sales are to large buyers who only purchase new, I suspect that a percentage of these gains does represent smaller businesses switching back from used to new, as the economy — and their business outlook — improves.

The other question, of course, is if new sales are rising, are supplies of second-hand vans? The combination of this plus a greater percentage of buyers choosing the new option could end up weakening demand for used vans, although I don’t think this will happen for a little while longer.

1 thought on “Van registrations rise by 21.7% in January”