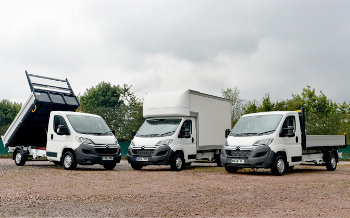 Citroën will introduce a new high-specification Enterprise model to its ready-bodied Relay Ready to Run range for 2015. Available from late April onwards, the new models will be debuted at the CV Show in April.

The Enterprise specification of the Relay chassis cab used for Ready to Run conversions will include:

Not bad, I reckon, especially at Citroën’s traditionally competitive prices.

Citroën will also introduce its first Euro 6 van models at the CV Show.

From July 2015 through to September 2016 there will be a rolling programme to introduce advanced, low emission, highly fuel-efficient BlueHDi Euro 6 compliant engines to the Citroën LCV range.

The firm is introducing a Selective Catalytic Reduction (SCR) solution to meet the new standards, as are most other manufacturers. A particular challenge is meeting Euro 6’s targets for Nitrogen Oxide (NOx) reduction: as I’ve written recently, Euro 5 failed to achieve the targeted NOx reductions in urban use, and NOx is one of the most harmful pollutants in modern diesel emissions.

Citroën’s new Euro 6 diesels will be branded as BlueHDi, but will in due course become the only available option — from September 2015, I believe.