This week has seen three manufacturers announce new or updated pick-up models — in fact, given the rate at which blinged-up pick-ups are appearing on the market at the moment, I wonder if we are approaching the peak of this particular fashion?

Anyway, here’s a summary of this week’s new and updated models: 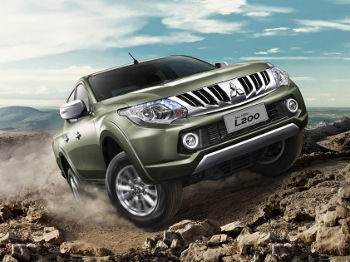 The current L200 is one of the longer-running models in the pick-up market, so it’s no big surprise to see that Mitsubishi is planning to introduce a new, 5th generation model, later this year.

The new L200 will make its debut at the International Geneva Motor Show in March, and is due to be launched in Europe in summer 2015.

The new L200 will be powered by an all-new 2.4-litre MIVEC diesel engine which the firm says will deliver a 17% reduction in CO2 emissions and will be controlled with a new 6-speed manual transmission. There’ll also be an automatic option.

Service intervals have been increased, ride quality tweaked and seating improved — apparently — while safety has also been improved with the addition of the usual raft of new safety systems, such as lane departure warning and trailer stability assist. 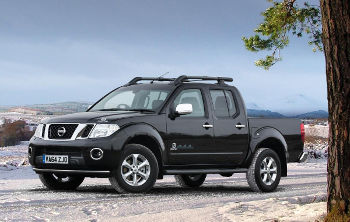 In the absence of a new model, pick-up manufacturers seem to be keen on introducing new blinged-up limited edition specials, targeting the growing lifestyle/fashion contingent who buy these large vehicles for reasons other than practicality…

As its name suggests, the Navara Salomon is targeting the ‘adventure lifestyle’ market.

The Salomon spec is based on the popular Navara Tekna trim and includes styling enhancements such as chrome front bar,  door handles and foglight surrounds. There’s also unique Salomon branding on the front, side and rear of the vehicle which is available in Metallic Black, Twilight Grey, Starburst Silver or Alabaster White.

On the inside, the Navara is boasts Salomon entry guards, a metal plaque, and Salomon floor mats. Assuming you wanted it, all of this extra stuff would normally cost more than £1,300, but the Navara Salomon costs just £750 more than the equivalent Tekna model, giving a saving in the region of £550.

The Navara Salomon is available in UK showrooms now, prices start from £27,845 OTR — and each Navara Salomon retail customer will get a £250 voucher to spend on Salomon gear. 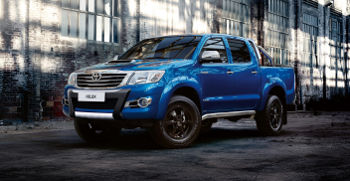 The Hilux is the original — and probably still the best when it comes to really rough stuff. However, buyers of the Invincible X, which includes an unhealthy amount of chrome, and the option of black or two-tone 17″ alloy wheels, are unlikely to be hammering their Hilux pick-ups across rough terrain anytime soon.

Toyota says that the Invincible X is its top-of-the range Hilux model and includes features such as a choice of four leather colourways for the seats, and four 17″ alloy wheel designs.

You can also choose chrome side bars “with or without steps” and select between a “hi-over bar or Style Pack” — the latter option includes “front guard, silver-coloured under-run, aluminium-finish scuff plates, chrome door handles and chrome surrounds for the bonnet air intake and rear lamp clusters”.

As you’d expect, the Hilux Invincible X will be powered by the top available engine option, Toyota’s 169bhp 3.0-litre D4D diesel engine, with a choice of five-speed manual or automatic transmission, permanent four-wheel drive and an auto-disconnecting differential.

The new Hilux Invincible X is available to order now, priced £23,842 for the manual model and £24,842 for the automatic (commercial vehicle on-the-road, not including VAT).