The average value achieved at auction for a used van fell by 2% in April, according to the latest figures from British Car Auctions (BCA).

The fall means that prices have remained below the record peak seen in December for four consecutive months, suggesting that the market is genuinely starting to cool. Although prices were still slightly higher than in April 2014, this difference was just 2%, which can easily be accounted for by a slight reduction in average age and mileage:

“Although we are reporting some price pressure as a result of rising supply and the typical seasonal issues we experience post-Easter, there is still plenty of demand from professional buyers and end-users.  Average values for light commercial vehicles have risen significantly over time.”

Interestingly, Mr Ward doesn’t cite a change in age or vehicle mix as a key factor in depressing prices, unlike his opposite number at Manheim. Perhaps the two firms’ stock mix is not quite the same.

Which vans are getting cheaper? 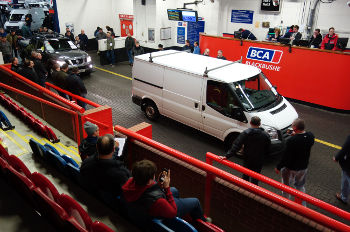 A closer look at the breakdown of BCA’s sales figures shows that prices are only falling in one category, Fleet & Lease vans.

These are vans, averaging less than four years old, coming straight off fleet from major lease and fleet companies. They are almost always well maintained and attractive used buys for buyers who don’t want to or can’t buy new.

In my view, the reason for this is simple: rising new van registrations. Small business owners who were economising by buying used are now buying new, sapping the strength from this market, which accounts for a large part of used volumes.

At the bottom end of the market, prices for cheap part-exchange vans (average age 7 years) are holding firm and rose slightly last month. Buyers of these vans don’t consider new as an alternative, although they might trade up to an ex-fleet van if times are good.

In my view, the market is only just beginning to adjust to the strong growth in new van registrations. The effects of these new vans purchases and, later, their entry into the used market, are likely to be felt for some years. Manheim’s James Davis believes it could be 2020 before the market has returned to balance.

I’m not sure that the market will return so precisely to a historic balance, but I agree that the adjustment is likely to take several more years.