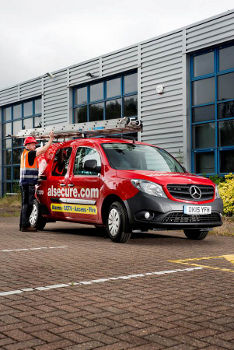 Manchester-based security specialist Alsecure Group Ltd has joined a growing list of companies who are switching to the Mercedes-Benz Citan, justifying Merc’s decision to add a small van to its range.

Alsecure had previously avoided the German marque because of its lack of small van models, but the availability of the Citan has changed the picture and Alsecure recently replaced three older vehicles with new Citans.

The firm’s three new vans are all Citan 109 CDI crew vans. Supplied by local Dealer Roanza, they have replaced the people-carrier cars used previously by engineers who fit and maintain alarm and CCTV systems, and the like, for Alsecure’s electronics division.

“For a long time Mercedes-Benz vans were too big for our purposes,” recalled Managing Director Rob Barry. “But following the launch of the Citan small van a couple of years ago, the manufacturer now offers a vehicle which is much better suited to our application.”

Alsecure’s Citan crew vans are fitted with second rows of seats so each can carry a driver and up to four passengers, while their Extra-long body length means they also retain a useful load area.

“We had a close look at the Citan, and Roanza let us try one out to see how it worked in our operation,” continued Mr Barry. “The crew van configuration is ideal for our operation, as we often have to carry teams of engineers as well as their tools and equipment.

“The fuel economy of the demonstrator was excellent too, while at every 24,000 miles the Citan’s service intervals are much longer than those of the vehicles we stood down. These factors, coupled with the reliability for which Mercedes-Benz is renowned, mean we’re looking forward to a significant reduction in overall running costs.”

The Citans will be serviced and maintained in Roanza’s Manchester workshop, which is open round-the-clock from 6am on Mondays to 7pm on Saturdays, as well as from 7am-7pm on Sundays.

“The fact that we can drop a vehicle off at the end of our working day and pick it up again next morning ready to go, is a huge benefit,” added Mr Barry.

Alsecure was established in 1968 and provides a wide range of guarding, key-holding and alarm response services, alongside electronic security measures, to customers across the UK.