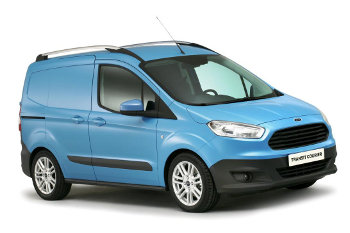 The new Ford Transit Courier — the passenger version of this model, the Tourneo Courier, has earned a respectable 4-star Euro NCAP safety score.

Despite their size, vans have lagged behind cars in terms of safety for many years, rarely scoring highly in Euro NCAP safety tests in MPV guise (commercial vans aren’t tested).

However, over the last year that’s begun to change, with the passenger-carrying variants of several new van models achieving four or even five-star Euro NCAP test scores.

The latest van-based model to be submitted to Euro NCAP’s demanding test schedule is the Ford Tourneo Courier, the MPV version of the all-new Ford Transit Courier van.

The Tourneo Courier managed a 4-star Euro NCAP score — a strong result where the main weakness was a disappointing 56% score in the ‘safety assist’ category.

This is a reminder that even the newest van models tend to have fewer safety systems that equivalent cars. In the case of the Tourneo Courier, the weak score was due to the lack of any option for autonomous braking (e.g. rear-end collision avoidance) and lane departure warning systems, both of which are becoming common options in new car models.

However, the Courier’s pedestrian safety score was good, at 74%, showing that van manufacturers have made progress in this area — a traditional weakness for commercial vehicles. Similarly, child and adult occupant safety were very strong, with scores of 84% in both categories.

The new Ford Transit Custom earned a five-star score last year in Tourneo guise — this latest result suggests that Ford’s focus on LCV safety is continuing and bodes well for the van market as a whole.