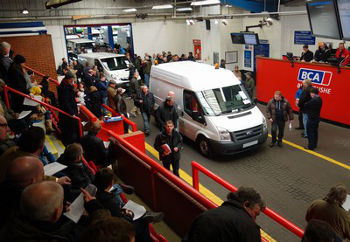 Used van values hit a new high of £5,870 in December, according to the latest figures from British Car Auctions (BCA).

However, in the two biggest used segments — ex-fleet/lease and part-ex — values were not the highest on record. Instead they were second highest (ex-fleet/lease) and third highest (part-ex).

Presumably a greater proportion of ex-fleet/lease vans, and perhaps the influence of the small group of nearly new vans (<1 yr old), were responsible for pushing the overall average up to a new record level.

This tends to support my theory that in the main volume segments of the market, prices have flattened out.

Given the appalling rates of pay on offer for self-employed and subcontracting operators in this sector, it’s no surprise that they were targeting used vehicles — I wonder if a portion of these will be resold, now that the Christmas rush is over?

Anyway, here are the December figures from BCA, along with last year’s numbers:

On a year-on-year basis, prices were 10.5% higher in December 2014 than one year earlier, although the average sale value slipped back slightly against CAP values, despite falling age and mileage.

In the ex-fleet/lease market, which I believe accounts for more than half of BCA’s sales, the changes were much smaller: the average price of £6,669 was the second-highest on record and was just 2.8% higher than in December 2013. That’s only slightly above inflation.

The other big sector for BCA is cheaper part-exchange vans, which tend to be older and higher mileage. Here, the average sale price of £3,848 was 3.4% higher than last December.

I suspect many of these were last minute, short-term Christmas courier buys which took place after the Black Friday sales, although I could be wrong.

Overall, these figures still give me the feeling that the used market is quite stretched and unlikely to rise significantly higher, especially as more ex-fleet and newer part-ex vans feed into the market, as new sales rise.