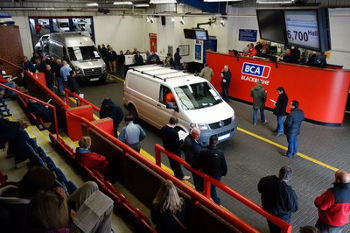 Vans being sold at BCA Blackbushe (image courtesy of BCA)

I admit it’s taken a while for my cautious outlook to be validated, but I reckon it’s now happening: used van values fell by 7.0% in January 2015, compared to December 2014, according to British Car Auctions. Prices are now just 2.6% higher than one year ago — only slightly above inflation.

Over at auction peer Manheim, it was a similar story. Although Manheim reported a 2% increase in January 2015 compared with December 2014, there is a reason for this: there was an increase in the percentage of desirable 3-5 year old stock in the vehicle mix in January.

I’ve been predicting this for a while, mainly because of the surging volumes of new van registrations.

The change in vehicle age mix at auction continues a trend first mentioned by Manheim in September 2014, shortly after I’d suggested that the reason used van prices were still rising was that more, younger vans were entering the auction halls, rather than that buyers were paying ever-higher prices for old bangers.

What do the numbers say?

According to BCA, which provides a more detailed breakdown than Manheim, the average price of a van sold at BCA in January was £5,640, down by 7% from £5,870 in December.

Ex-fleet and lease vans — which are usually between three and four years old — fell by 5.5% in January, compared to December, to £6,478, and are now only £24 higher than in January 2014. To me, this suggests that the market is now able to get the volume of vans it needs, and is able to mark down sub-standard stock.

As the volume of good quality 3-5 year old stock rises, buyers will be less willing to compromise on quality, specification or condition, and this trend was evident in January, too: both Manheim and BCA made almost identical comments about sub-standard stock becoming increasingly problematical to sell.

“There are also some issues over quality and presentation as vehicles from corporate sources are returning at generally higher ages and mileages than we were seeing a year ago.  It’s a timely warning for vendors that if the quality of stock is declining this will impact on the price performance.”

And here’s what his opposite number, Matthew Davock at Manheim said:

“Typically, when volume is high, the first two areas to feel the strain are damaged stock and duplicated stock – and we’re already seeing signs of this.”

Don’t get me wrong: I’m certainly not suggesting that the used van market is about to collapse: demand is clearly healthy and both Manheim and BCA reported strong selling in January, despite the increased volume of vans.

However, there’s no doubt in my mind that surging demand for new vans — registrations rose by 18.7% last year — and the strengthening economy will combine to tame the wild inflation that’s been seen in the used van market over the last couple of years.

January 2015 and December 2014 may have been extreme cases, but I suspect that the trends seen in January will continue well into 2015, as the market rebalances to reflect new buyers’ greater share of the market.