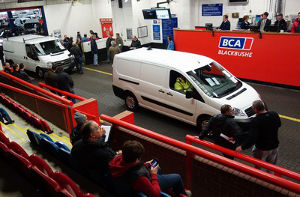 After months of waiting, it looks like I’m no longer the only person calling the top of the used van market: Duncan Ward, BCA’s Head of Commercial Vehicles — a man with much better visibility of the used market than me — believes we may have reached a turning point:

“We have been predicting a tipping point in used values for some time and possibly we are starting to see a levelling off following many, many months of average value growth.”

Mr Ward’s comments were made alongside February’s used van price report, which showed that the average used van price at BCA rose by £72 in February, compared to January. Prices were also higher against February 2014, but age, mileage and sales vs CAP price all fell, suggesting that in real terms — relative to age and condition — valuations are weakening:

As seen in January, higher volumes and and a significant number of vans with issues over quality and presentation were key factors in February’s auction market. Mr Ward again:

“Corporate volumes took a slightly larger share of the market in February, although issues over quality and presentation remain as vehicles from corporate sources are returning at generally higher ages and mileages than we were seeing a year ago.”

“Notably, the average price performance for both fleet/lease and dealer part-exchange vans was lower than a year ago, a result of the generally poorer condition and higher age and mileage profiles reaching the marketplace.”

Things are set to get worse, too: Mr Ward’s believes that the approach of the Easter holidays and May’s general election could trigger “uncertainty” in the wholesale markets and make now a very good time for van dealers to “appraise any over age stock and get it sold, rather than chasing the market in a few weeks’ time if values soften.”

Strong words: in my view, suggesting that a full-scale retreat is now likely in the face of a continuous rising tide of new van registrations — as I’ve been predicting for some time.