Nissan has given van buyers their first taste of the firm’s new NV300 van, which will replace the Primastar.

Like the Primastar, the NV300 will be built on the Renault Trafic production line in France. It will essentially be a rebadged version of the popular Renault model. However, Nissan was at pains today to emphasise the new styling of the vehicle and the teaser photo does suggest that it will have distinctively Nissan-like front end: 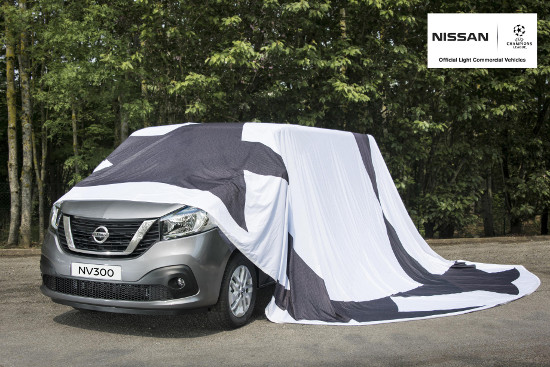 According to the Japanese firm, “Nissan’s latest Emotional Geometry design language – well-known from its class-leading Juke, Qashqai and X-Trail crossovers – is clear to see on the NV300, with the familiar ‘V-motion’ grille dominating the front end.”

The van should gain some useful exposure among potential buyers thanks to Nissan’s role as the Official Light Commercial Vehicle Partner of the UEFA Champions League.

When it arrives in showrooms in the autumn, the NV300 will extend Nissan’s LCV range, which already includes the smaller NV200, the Renault Master-based NV400 plus the new Navara pickup and the zero-emission electric e-NV200.

However, in my view the NV300’s biggest attraction over its Renault Trafic and Vauxhall Vivaro stablemates will be its market-leading warranty. Nissan is offering a unique five-year/100,000-mile pan-European, manufacturer-backed policy that’s fully transferrable to second and subsequent owners. It includes five years’ roadside assistance cover.

In contrast, Renault’s 4+ package provides similar cover for four years. Vauxhall only guarantees new Vivaro vans for three years. For this reason alone, I’d be tempted to buy a NIssan NV300 rather than a Vivaro or Trafic.

However, I doubt that a generous warranty package alone will be enough to steal the Trafic and Vivaro’s established share of the SME and fleet market. The NV300 is also a relative latecomer in this segment, as it won’t go on sale in the UK until autumn 2016.

1 thought on “Nissan hints at fresh style for NV300”