Ford’s best-selling Transit and Transit Custom vans will now benefit from a reduction in fuel consumption and a significant fall in CO2 emissions, thanks to the firm’s all-new EcoBlue diesel engine. 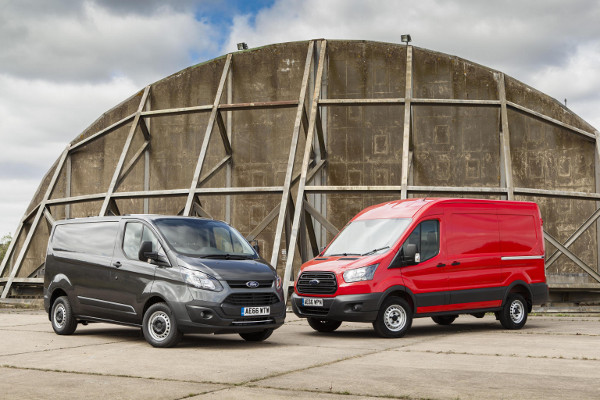 The Ford EcoBlue 2.0-litre diesel will replace the 2.2-litre TDCi engine previously used across the Transit and Transit Custom ranges. EcoBlue promises to deliver improvements in fuel efficiency of up to 13% and CO2 emissions from just 157g/km, along with improved low-end torque.

The new engine is avaialble now and offers three power levels, 105PS, 130PS and 170PS. Low-end pulling power is said to be improved across the range, with 20% more torque available at 1,250rpm. That means responsive, relaxed performance during regular driving — and fewer gear changes.

Transit models equipped with the new engine and optional Auto-Start-Stop will deliver average fuel consumption of 42.8mpg and CO2 emissions of 174g/km, says Ford. The equivalent figures for the smaller Transit Custom are 46.3mpg and 157g/km.

Ford believes the engine’s improved fuel efficiency could save van operators up to £1,250 over 80,000 miles, based an operator replacing an outgoing Transit Custom 100PS model with an EcoBlue 105PS model.

Service intervals have also been extended and are now two years/36,000 miles for both Transit and Transit Custom models. Personally, I like the idea of such long intervals for high mileage users. However, I can’t help feeling personally that two years is just too long for a vehicle to go without an oil change and mechanical inspection. Maybe I’m just old fashioned…

Ford also used the IAA Commercial Vehicle Show in Hanover as an opportunity to showcase an updated all-wheel drive system for the Transit.

The new intelligent Transit AWD system combined the front differential and AWD coupling into a single unit, reducing weight by 10kg and allowing the driveline to be packaged more efficiently around the EcoBlue engine.

The electronically-controlled coupling can vary front/rear torque distribution by between 0:100 and 50:50. Auto AWD mode is used for standard driving, while an AWD Lock mode is available for times when permanent four-wheel drive is required.

Transit AWD models can be specified with either the 130PS or 170PS Ford EcoBlue engines, across a range of panel van and chassis cab body styles. The new Transit AWD will be available to order later this year for delivery in 2017.

No one can accuse Ford of resting on its laurels. In addition to the new EcoBlue engine and AWD system, the firm unveiled a new six-speed SelectShift automatic transmission for Transit and Transit Custom vans at the IAA Show.

The new system is based on a design that’s been proven in the North American market, where it’s been used in front-wheel drive vehicles with a torque capacity of more than 415Nm. The new system will be available in Transit Custom and front-wheel drive Transit models specified with 130PS or 170PS engines. Auto-Start-Stop will be standard on all automatic variants.

Ford says that the SelectShift system has an average gear shift time of less than 0.5 seconds and has been optimised for commercial users. Manual shifting is available if required, using a switch on the gear lever.